Karen, Wendi and I ordered room service for breakfast so we could sleep in a little later and not have to rush around getting ready for the day and going to one of eateries.

We had a Gypsy class at 9:30, and I don’t think I learned anything I didn’t know and I still don’t care for the Gypsy. BFF Karen did work with my Gypsy a little bit. She kept saying I was going to break the screen and I told her "I have to bang on it like that for it to work". I don't think she believed me until she tried it herself *okie felt so vindicated*.

After the Gypsy we went to the Meet & Mingle that was hosted by Cruise Critic and Royal Caribbean. They gave us some nice cheese and fruit for a snack and talked about the entertainment and shopping on the ship. They did a raffle and several people from the Cricut group won some prizes…I was not one of them, but at least I did get free cheese! We headed to the buffet for lunch after the Meet & Mingle and ate with Danita and her husband. We actually thought the food was better in the buffet than what we got in the dining room the night before.

The next class was the Imagine class. We were late for that one due to eating lunch but I didn’t mind since I don’t have an Imagine and don’t care to have one. I know there are a lot of people that love theirs and that is great, I just really like my pretty paper. I think I spent most of the class looking around at everyone and dreaming of finding a beach the next day at Cozumel.

I was so excited about the Cricut Craftroom/Cricut Mini Machine class but was quite disappointed. I thought we were going to be able to follow along using our own computers while they taught the class but this was not to be. There were two large screens for us to watch as the instructor taught but the one on the side of the room where we were sitting was not focused and hurt my eyes. I did move to the front on the other side of the room but still found it hard to go along with since I couldn’t do the hands on with the program on my laptop that I toted on the ship with me just for this purpose. I will say Dan worked hard getting everyone set up but there was some type of network problem and he wasn’t able to get everyone set up. I think I would have enjoyed learning if I had been able to have it up on my own screen and follow along and might have learned something. At this point I was feeling CCR is not worth my time and would be sticking to my Design Studio for the rest of my life.

We all met for a group picture, since it was formal night we were all dressed to the nines, before dinner. Okay I will be honest and say not everyone was dressed up since there was a couple that came in with t-shirts, shorts and ball caps on their heads. I was rather shocked that they allowed them in the dining room dressed that way since last year a man was not able to get in on formal night without a tie, but I guess each cruise line is different. I was having problems keeping "the girls" in my top but a little ATG tape took care of that problem. Who said that dang ATG gun was for crafting only? It was a little hard to remove from my skin afterwards but I just had to be careful to peel slowly to get it off. 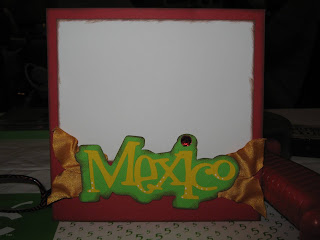 I think there might have been a class after dinner, I can't really remember. You always think you are going to remember everything but since so much happens in such a short period of time it makes it hard to remember. We did attend the nightly crop that night and the Make And Take project was a little frame that included a title of "Mexico".

Here are some of the ladies lined up to get their supplies for the Make N Take project. The instructors were great with working with the crowd of crafters and answering all the questions and made sure each person had some personal help and time. I tell ya Provo Craft must give their employees some Valium or something because they were always so calm and even keel *okie thinks she could have used some Valium a few times to deal with some of the rude passengers on the ship*.


I got to visit a little with Brianna and Richard during the crop that night. Richard works for PC as a graphic designer and he was so super helpful and sweet. I did find out he also had a great sense of humor. His wife Brianna must surely be a saint because I think Richard has quite an ornery side!

All the folks that came representing Provo Craft were friendly helpful and amazingly patient! I know there were a few times I think they thought I was upset when I couldn't get something to work and I would just say "I can do it at home, it's fine" and they would say "it's not fine". I guess I should have explained I love to socialize during such things and am too dang nosy to finish anything I do and always have to finish projects at home where I am undisturbed and can concentrate. My friend Linda, aka LGuild, can surely attest to this as she has seen it for years. I never care if I get anything done, I just want the project and want to be nosy and visit! *okie falls out chair laughing* 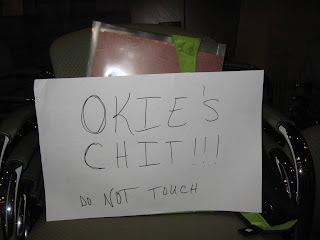 We were very lucky not to have to tote our belongings back and forth from the conference center to our rooms if we chose not to do so. They were able to lock up the room so no one could get in. Since PC had several thousand dollars worth of supplies in the room I figured my hunderd dollars worth of supplies were probably safe but just to be sure I made a little sign to make sure no one touched my CHIT! HA HA HA HA HA

This was the night we were all given a certificate saying we would be receiving the new Cricut Art Cartridge Ole, which will be great to do some layouts of our trip to Cozumel...which will be my post for tomorrow!
Posted by okieladybug or okie_ladybug