After dinner the last night there were Cricut Plushies on our beds and each one had a note stating we would be sent a Cricut Mini machine! Now had I been told this before the cruise I likely would have rolled my eyes and thought "oh great another machine I can't use because I have to use Craftroom" but since we had played around with Cricut Craftroom while on the cruise and I got a chance to use one I was rather excited!

We were to meet later that night for the Closing Social. We knew at this point that the last Golden Cricut Expression was going to be given away! I had told Dan "don't put my name in there, if I won it I would have to polish the dang thing all the time because I wouldn't be able to stand the finger prints!". Now whether Dan left my name out or not is unknown to me. However the winner of the Golden Cricut was none other than my friend Sandie!!

Here is Sandie showing her new Golden Cricut some love. Somehow she managed to pack that thing in her bag and get it home. I don't think she trusted anyone to ship it to her *okie cracks up laughin*. 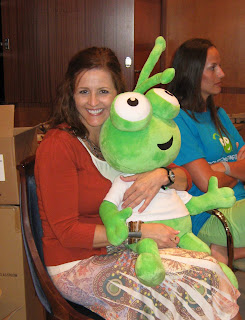 Another big prize was the rather LARGE Cricut Plushie which my friend Treva won. Treva got such a case of the giggles about winning this and thinking of how she would have to buy another plane ticket to get it home. She just kept giggling and that made all of us start laughing as well! Treva was very lucky since this is the ONLY Cricut Plushie this size! I think she could catch a pretty penny for it on eBay but I have no idea what she plans to do with it or how she got it home.

Here is Christy Carson, one of the fabulous instructors from ProvoCraft giving the giant plushie a little love.

Senor Cricut and Senor Cuttlebug even showed up for the party! Being the suave bugs they are they danced with a few of the ladies! My friend Karen Silva can sure cut a rug as she danced and glided with the Cuttlebug! I will see if I can find a picture later of Karen dancing. I was totally jealous of her skills! A lot of ladies clamored to get their picture taken with the Rico Suave bugs!

There were many other prizes given away that night as well. People were winning Cuttlebugs, Quilling Sets, Cricut Back Packs, Imagine Inks and I don't even know what else. Not everyone won a big prize and those that didn't win were asked to leave while the ones that didn't win were suppose to stay. I thought this was very nice of Dan and the others with ProvoCraft to want to make sure everyone got a little something extra. I mean we had already won the Ole cartridge, a back pack, a scoring tip, got $25 in Cricut.com credit for completing a survey, a Cricut figurine, a small and large Cricut Plushie and a Cricut Mini...how much did they think we needed to win??

Let me tell you something about women and free stuff....it is NOT A GOOD COMBINATION! Well the generosity turned into a fiasco as women started grabbing stuff left to right. One woman grabbed 4 of the quilling kits as others were just trying to get one. People were snatching supplies from here and there off the front table. I offered to hand out the Cricut Mini mats because at this point some of the PC folks were starting to look a little frazzled at the chaos. I don't think they had any idea what ugliness would come out of the situation. There were a few ladies trying to snatch the mats out of my hands. Well if you know anything about me you should know that is never a good idea to try and snatch something from me. One lady told me "you need to put those down" and I told her "you can have them if you pry them out my cold dead hands because I am not letting go until a PC employee tells me to put them down". I knew there were a few ladies that had gotten NOTHING during the, well the only way I can describe it is...SMASH AND GRAB and I was going to go down with the mats if I had to but those ladies were gonna get some extra mats if it was the last thing I did!

The ProvoCraft group was nice enough to donate a tool kit and a cutter for the school where I work. I did actually ask since they had donated an Expression during a promotion a few years ago. I took the items to the school and they were thrilled to get the donation!

After most of the ladies left when they felt they would get nothing else *okie sighs deeply and rolls her eyes just thinking about the chaotic frenzy* some of us stayed to help clean up the room. There was stuff everywhere and we sure didn't feel like the PC folks should have to do it all since we knew they had to be tired as well. We started gathering what was left and tossing stuff in boxes and taping them up. Within no time it was all packed up and we were ready to go finishing packing up our personal belongings and get ready for the trip home the next day....

MORE TO COME! I will be posting more about the cruise and sharing links to blog posts by some other cruiser's. I want you guys to be able to get the experience from the point of view of others as well as I might be a little boring...oh wait, who are we kidding? That is one thing no one can ever accuse me of is being boring!! HA HA HA
Posted by okieladybug or okie_ladybug