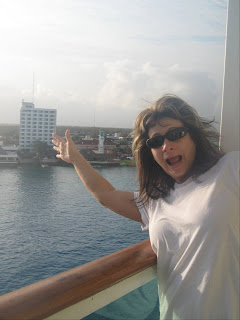 Day 3 of the cruise was spent docked at Cozumel. The weather was really overcast as you can see with this picture of Wendi being excited about arriving in Mexico. We weren't really sure what we would do while there but we did know we would get off the ship and at least look around. Which was about all we did there. We soon found out we were on the wrong side of the island to hit a beach. There was a private beach but it would have cost us around $50 each to go in and enjoy it so we opted to just walk around a little and then go back to the ship. 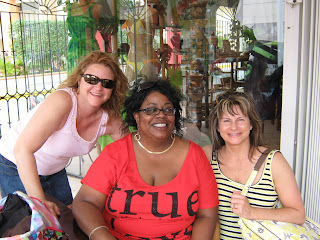 We ran into Danita Kinney and her husband Keith while walking in Cozumel. Her husband had went to rent a jeep for them to drive around in and I guess they had quite the adventure as they got lost and ended up doing a U-turn in front of some type of military complex. We all were laughing until our sides hurt and she was explaining how the men had guns and were laughing at them as the men realized that she and her husband must have been lost.

One of our tasks was to find sand from each location we docked. We got some sand from Senor Frogs and called it good. This is a picture of our ship as we were going back to board and enjoy the pool while most people were ashore.

Once we got back on the ship we had a little lunch and then hit the pool. We found Shirley Schaeffer there and enjoyed her company while soaking up some rays. Wendi jumped in the pool and said it was cold and she came back out really quick. 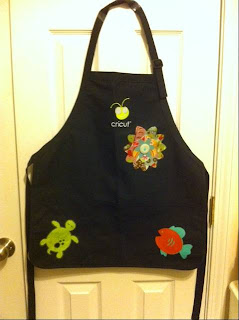 The evening was spent doing our first project which was an apron and we learned how you cut fabric using the Cricut. Class A was given the choice of choosing a black apron or a white apron. I chose the black one. When Group B came in most of the black apron's were gone and Danita was wanting a black one so I gave her my finished apron *okie thinks she can be nice sometimes, but not often*. I forgot to take a picture of my apron and had to get a hold of Danita and she was nice enough to go take a picture of the apron and email it to me so I could post it. I did find it was very easy to cut fabric as long as you use decent fabric that has a good thread count. We were told to make sure you first adhere the fabric to Heat And Bond and then cut. We were given the file so we could cut the fish and turtle ourselves. The flower was already cut for us and that made it easier to finish the project.

We also received the coolest little Cricut rolling totes that had a little Cricut plushie in it and also the new Cricut Scoring Tip with Housing! I can attest that these little bags are quite durable since I toted it all over the Grand Caymans and Jamaica! I also know it will hold two liters of alcohol, clothing, crafting supplies and water bottles on the side, because that is what I had in it when I got ready to go home. Boy did that little rolling tote come in handy! 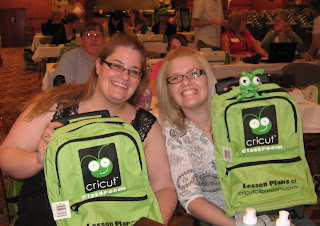 I was able to snap a picture of Jennifer and her sister Leila proudly displaying their new bags. During open crop the project was a washcloth bunny head. I worked on the layout kits I brought so I could at least say I accomplished something. I will have to post those at a later date.