I can't believe I have neglected this thing for this long! Of course I have been busy with school after it started and this year seems to be the craziest for me. Maybe I am just getting too old for this rough schedule and never ending paperwork. I seem to get fatigued way too easily anymore and after a doctor visit last week I now know why....I have let my sugar levels get out of control! Bad okie, bad bad bad okie! I did so well for a number of years but I have gotten lazy and since the kids live here it's easier to just give in to bad eating habits. That has to change immediately if I don't want something worse to happen!

There has been a lot going on while there has been nothing going on...not sure how that works but it does! Shiane and Chuck broke up for a few weeks, long story short my daughter is nuts! Okay not really, but she got scared about commitment and all...not sure where she gets that from *okie bats her eyelashes and gives an innocent look* but now I think she has decided he is the one. Thank goodness because I don't know how much longer my nerves could have handled the stress.

I haven't been doing much crafting due to work and fatigue and I really need to get started on some stuff for the party and the craftshow. Yeah I am going to be stressed to the max for the next few months...without a doubt!

I will try to post more, even if it is about the crazy crap that goes on at my house. I don't want you guys thinking I have fallen off the face of the earth...just been hiding under a rock for a bit! HA HA HA
Posted by okieladybug or okie_ladybug 11 comments: 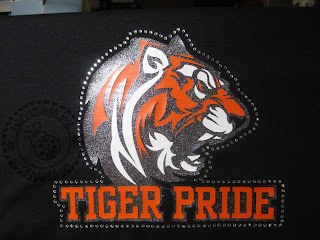 This weekend won't be filled with crafting and learning but we will be sporting our t-shirts at the first home game!
Posted by okieladybug or okie_ladybug 5 comments:

Okay first off let me tell you that you shouldn't layer glitter or foil HTV. I have done  a lot of research and everything I have read say it will come apart in the wash. I am usually one to say "oh yeah? well I will try and see" but when this stuff is so expensive I just don't want to take the chance. I had layered regular HTV last year when making t-shirts and sweatshirts and didn't have much of a problem. 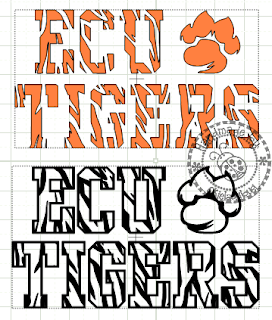 I knew that I needed to do what I called and "inset" for the colors and I wanted to show my friend Danita of Danita's Designs how I do it. Oh and if you got time go check out the birthday gifts she made her daugher, even a pair of Modge Podge Shoes!! I decided to make my daughter a t-shirt with the letters being a a tiger print and of course it was a cinch to do in Make The Cut so I could demonstrate to Danita how to work with multiple colors of the specialty HTV materials. I also posted a link for her to watch- HOW TO LAYER GLITTER HTV, this is a great video and they show you exactly how it works.

After getting my letters all done I added a very small shadow so the black would overlap the orange just a hair to avoid gaps.

I asked my daughter how many black t-shirts she thought she would wear and she was like "how many are you gonna make me?" so I guess I am safe making her as many as I want HA HA HA. 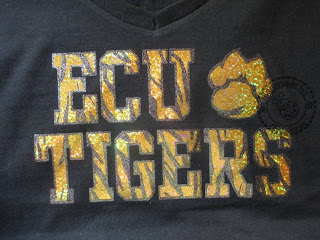 This was the project finished. It was hard to get a good picture of this one too but I think you can see the general idea. I think it would look totally awesome on white and I might do this one for me on a white hoodie!!

Tomorrow's post will be the tiger design on how I originally planned it to be and is my "official" design for this year's football t-shirts!
Posted by okieladybug or okie_ladybug 3 comments:

During my trip to Walmart I found some t-shirts on clearance for $3 and I picked up a few in each size. I knew I would have to make some for my daughter, Goddaughters and their mother. What I don't use I will take back. 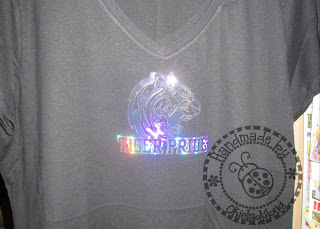 Once I knew the Spectrum Holographic would work okay I did my daughter and two of my Goddaughters t-shirts with that HTV. They loved them! I did this design a few weeks ago in anticipation of it being this year's pattern for our t-shirts. I really like it being the silhouette with this type of HTV. Sorry for the bad picture but it is really hard to get a decent picture of this stuff. 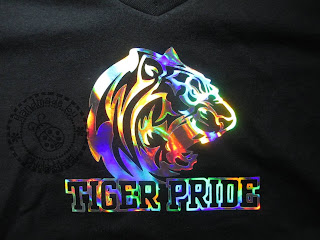 Here is a close up shot of the design and I think you might be able to see it a little better. You can see how shiny it is. This is one of the ones that the weeding wasn't perfect and as you can see the outside foil area didn't stick to the t-shirt. 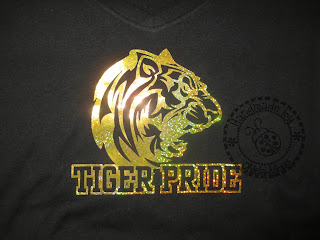 I wanted to make my shirt and my friend Andrea's shirts a bit different from the girls so I used some Gold Holographic Foil HTV for our t-shirts. I really like how this one came out!

Tomorrow I will show you how I do fill in the areas with different colors.

Posted by okieladybug or okie_ladybug 10 comments: 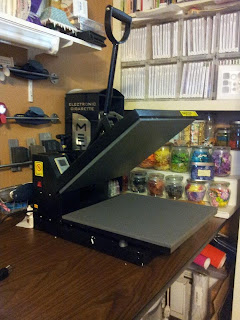 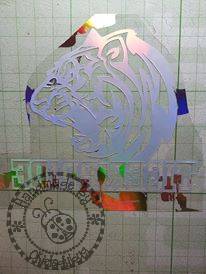 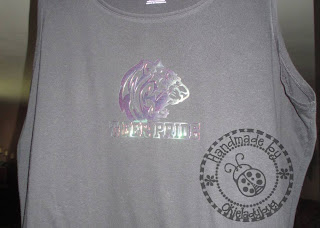 I have some others to show but I don't want to bore you all in one post so I will get a few other posts this week. I am still swamped with work right now so I won't be blogging regularly until things calm down.
Posted by okieladybug or okie_ladybug 6 comments: