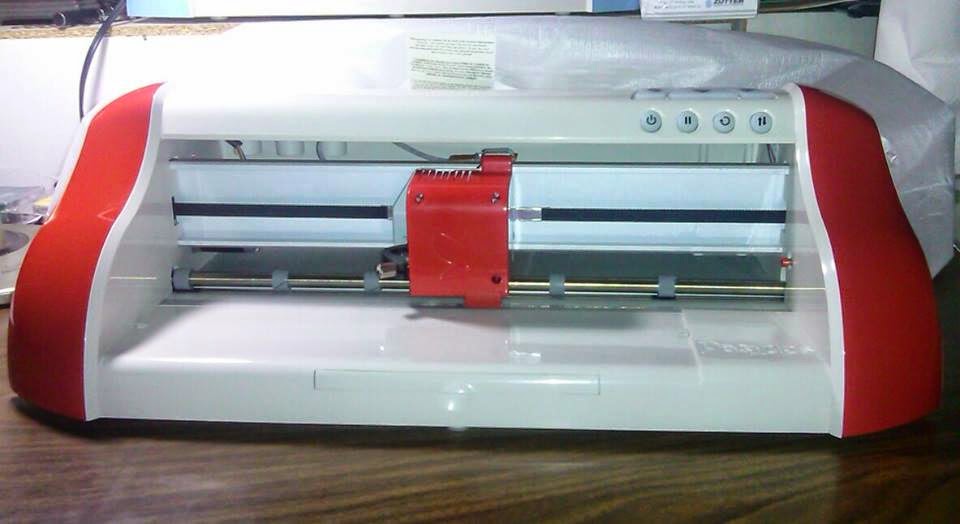 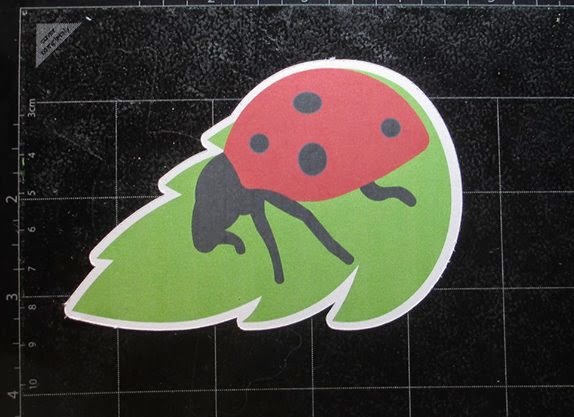 The software that comes with the Vue seems like it is going to be easier to learn than I thought and it does have a lot of features like Make the Cut. I am however waiting patiently for MTC to get the plug-in for the Vue so I can go back to using it. Hopefully I can start playing with the new machine soon and get to know this machine as well as I have my machines in the past.
Posted by okieladybug or okie_ladybug 2 comments:

Okay I haven't posted in quite sometime but I really have the need to post about this matter so all my lady friends *okie thinks that even the unladylike friends as well* can be warned about a certain product that might be bought for delicate matters.

It seems to happen to all of us women from time to time, some more than others, and it is not something I like to discuss...especially in mixed company so any men readers please leave at this time *okie points to the man standing in the back* Ummm, yeah you...LEAVE! Anyway, we all have to deal with that dreaded yeast infection *okie cringes and her face turns bright red even saying the word*. Years ago there was the 7 day treatment and you had to go to the doctor to get it but now days you are able to diagnose your own situation and can run down to the corner store and choose from a wide array of products that vary from 1 day, 3 day and 7 day. Most of the products I can't even pronounce so that lets me know they gotta be good and work well...RIGHT? 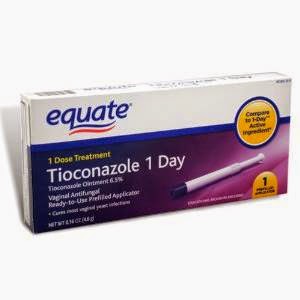 Now is the confession time...I had go get a treatment the other night and as I stood in the aisle looking at the buffet of creams and suppositories that was shelved in front of me I was in awe of the choices available.

I being a person of instant gratification I grabbed the Equate Tioconazole 1 day treatment  and shoved it under my arm, concealing it in case I ran into anyone I knew, and left the aisle. I was thrilled with the idea of having relief by the next morning and not having to repeat treatment over several nights. Of course since it was still early evening time I had to wait until bed time to use the product.

The instructions were simple and I followed the directions for the treatment feeling a bit smug about being a smarty pants and finding a 1 day treatment. Somehow I never even thought about how when something seems too good to be true it usually is...I likely won't make that mistake again and well...the following is the review I wrote for Amazon.com, whether it gets approved or not is another matter. I just wanted to warn others about this product and since I don't know if it will get approved I thought I would swallow my pride and share my experience here with you ladies.

I tried this product with hopes of it knocking out the irritating itching of a yeast infection and I didn't bother to read the warnings until AFTER I had inserted the product and noticed some slight burning and was afraid I was having some allergic reaction. As I read information about the product the burning started to get worse. I quickly logged onto the internet and started reading more about this product and found a lot more information about the side effects, especially the burning part. If you have ever seen Breaking Dawn and saw where Bella had turned into a vampire and she was grabbing at her throat and burning from the inside out then that is what I would compare it to! If that is not a good example then think about your womanhood being on trial in the Medieval Period and being sentenced to most excruciating form of execution...BURNED AT THE STAKE! I really don't think that is an exaggeration.

A friend of mine had used a one day treatment and she said it worked so I texted her and told her "I'm on fire internally!" She assured me it would be better by the next day. I texted her back with "If not then I'm going to the ER to have a coochiectomy!" I wasn't sure I was going to be able to go to sleep and was even afraid to move in the bed because it made the pain worse but luckily after an hour or so of writhing in pain from the internal fire that was supposedly medication I was able to go to sleep.

I woke up the next morning and ERMAHGERD I had some major swelling going on. Although I didn't take a look and see for sure but I am thinking my nether regions had turned into the Michelin Man. I took a shower and tried to rinse the area thoroughly with cool water in hopes of reducing the swelling and allowing me to walk half way normal so I wouldn't have to explain the reasons for my rather odd gait. I did notice that as time passed the swelling went down and the pain had reduced to just a mild irritation. By that next afternoon I felt so much better and by that evening I think I felt almost normal again. I think it did knock out the yeast infection in one day and that was a definite plus but I am not sure I would use the product again due to all the side effects.

I gave the product 4 stars because it is effective and after the tortured suffered and survived I feel that my coochie must now be immortal, that within its self is worth 5 stars, however I will stick with the 4 star rating. If you want something that works fast and you can withstand your coochie suffering extreme torture I highly recommend this product. If you are not into pain and find no problem with doing a 3 day treatment then I would say go that route.

So now you know my shame and you know my feelings about this product. So please be warned if you are thinking about getting fast relief with this product just remember the torturous effects it can have as well!
Posted by okieladybug or okie_ladybug 6 comments: