I have always been confused about Memorial Day. I guess maybe because in some ways I can be sticklers for rules. It still is ingrained in me not to wear white after Labor Day and before Easter, although I do force myself to do so on occasion just so I can say "I'm not a slave to fashion", which I really am not...believe me. Oh but back to Memorial Day *okie wonders if anyone saw that squirrel run across her laptop*. As a child I remember going to the cemetery with my mother as she put flowers on the graves of my brother, sister and grandpa and it always confused me since in school we were taught Memorial Day was to commemorate and remember those who served our country in the Armed Forces, so for the life of me I could never figure out why everyone got flowers on their graves. Although I will admit I do not want flowers on my grave, oh heck I don't even want to be buried...I want to be burned and flushed down the toilet while everyone cheers with a Margarita! And if you think I am kiddin, then you just don't know me very well!

But on this Memorial Day weekend I want to share a little story. My daddy *okie still wonders why in the south a father is always a daddy no matter how old the daughter gets* quit school two weeks into his Senior year so he could join the Navy and serve his country during World War II. Daddy wouldn't turn 18 until November so his dad had to go down and sign papers so he could join. Daddy was never able to finish his high school education and drilled the importance of education into my head, not sure why I was the chosen one in the family to have this preached but I held the importance very close and followed through, even after his death.

Since Daddy fought in WWII he taught me something that most people do not understand today, as an American I have "rights" but those rights are only allowed to stay in place because others have been willing to fight and die to ensure MY FREEDOM. He taught me about patriotism, respect for the flag, national anthem and pledge of allegiance. He taught me what the words meant and not to just listen to those words but to FEEL what it is to be patriotic to our great nation. In our house if the National Anthem came on the TV you stopped whatever you were doing and listened and did not move until it was over, to do otherwise was unthinkable. To this day I can rarely listen to the National Anthem without tears coming to my eyes. Every morning at school when we say the Pledge of Allegiance I mean every word I am saying, much to the extent that when I see someone burning an American Flag I would like to go explain to them and have them understand what my daddy taught me and if they didn't get it...well I would just shoot them in the head and call it a day. Luckily my Super Ego is strong than my Id, at least on most days.

I have never went to my daddy's grave on Memorial day so I can pay my respects. Over the years I have shown my respect in a different way. Every time I saw someone who was in one way or another identified as a WWII veteran, I would walk up to them *okie remembers choking back tears most of the times* and thank them for ensuring my freedom. I let them know my father also served in that fateful war that still allows us to have our freedom to this day and that he taught me about what it means to be patriotic and love my country and those who served and fought for THE GREAT UNITED STATES OF AMERICA.

So with this little story I would like to tell all of you have a Happy Memorial Day and if you see a veteran of the Armed Services then tell them thank you for ensuring your freedom.
Posted by okieladybug or okie_ladybug 14 comments:

Sorry I haven't posted in a few weeks. I have been working diligently on converting a bunch of images so I can get some serious crafting done this summer and of course all projects I make will include the files in Make The Cut format for you wonderful folks. With me just working on converting files I haven't done any crafting and haven't had anything to post.

After all the devastating weather Oklahoma has had the last two days I thought I better check in here since I have heard from people on Facebook all over the United States, a few from Canada and even as far as the UK and Australia wondering how I am fairing in this terrible outbreak of tornado's in Oklahoma.

Luckily my town has been spared so far. On Sunday the town Shawnee was hit heavily and that is about 55 miles north of me. I didn't have any loved one's in that particular area that got hit but my heart went out to all those effected.

Today we had massive tornado's in the area from Newcastle to Moore. I grew up in Newcastle and have cousins that live in that town. I have sisters, nieces and nephews in Moore. I can say I honestly prayed and prayed during the time the newscasters were giving reports of the devastating tornado. The reports given let me know the tornado was headed straight to my sister Cheryl's home. I was able to finally get a hold of her husband and he let me know that she had gotten the dogs in the car and drove south to another town called Norman. I have heard from or reports of all of my family expect for two of my nephews at this time. Cell service is down in the area so I am unable to find out updates on my sisters home or the welfare of my nephews at this time but they likely were at work and not in the area at the time.

I can't even begin to express my feelings right no of how blessed I am feeling but the guilt for feeling blessed when others are suffering greatly from the loss of their homes and loved ones. At this time the death toll is at 51 and they are still doing a search and recovery at an elementary school that was leveled.

Please keep everyone in your prayers.
Posted by okieladybug or okie_ladybug 24 comments: 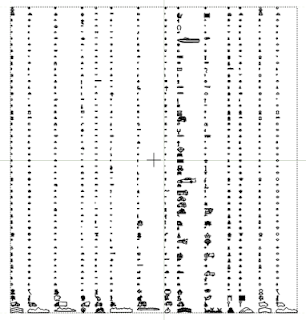 Okay, I talked about it...I talked about the elephant in the crafting world. It's out in the open as far as I am concerned and I feel much better. So shall we stop whispering about this dang thing and just say "Yep, that CD does exist".
Posted by okieladybug or okie_ladybug 32 comments: