Sorry for the interruption of the posts about the 2012 Cricut Cruise. I got busy taking care of some other things and haven't had time to post!

On the 4th day we stopped at the Grand Caymans. We had to be tendered, which means ride a little boat, over to the island. The boats were actually pretty fast so it didn't take long to get to shore. 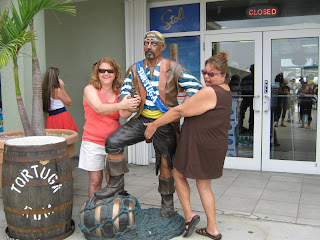 We walked around a little while before heading off to find a beach. We all took turns getting pictures with some pirate statues. BFF Karen was determined to steal the man's rum while I, uh...well had other things on my mind! *okie falls out of chair laughin and refrains from saying the pirate statue was a little stiff*. 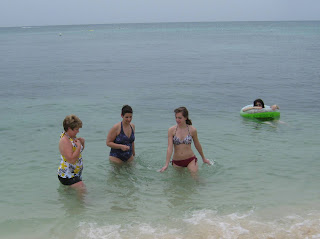 We were determined to hit the sand and sea since we missed it at Cozumel. We stopped at one place and they wanted $49 to enjoy the beach and we declined rather quickly. There were taxi drivers out everywhere and the cost to ride to 7 Mile Beach was only $2.  The beach wasn't too crowded and while we didn't have lounge chairs or other luxuries we still enjoyed the sand. It was pretty cloudy that day and we wondered if we would get any tan...I succeeded quite well! Here is Sandie, Annette and her daughter looking for shells while Margie floated in her blow up ring enjoying the cool water. 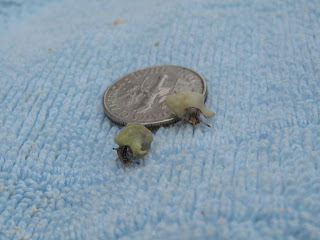 One cool thing we did see at the beach were some tiny hermit crabs! I came out of the water and BFF Karen was showing them to me. We put them on a towel to take a picture and was wanting to show how small they were so someone laid a dime out next to them. I think they said some little boy bought them over. I am pretty sure none of us would have seen them with our bad old lady eyesight! 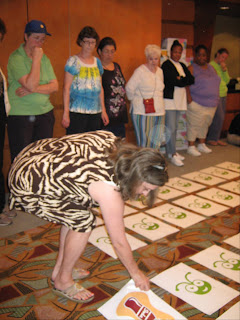 I didn't want to play because I actually suck at the Memory Game but I did find a match my first try. Of course it was because I kept moving around in the ring of people and was one of the last ones and I knew where one was. I actually found a champagne bottle and glass so that one was easy for me to remember! HA HA This is my friend Karen Silva playing the Memory Game. 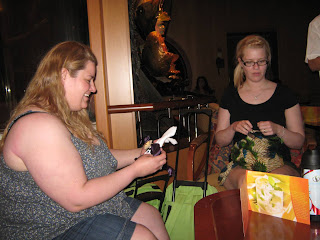 After the Surprise Event we had open crop and the Make N Take was a washcloth bunny head. I opted to work on a layout kit I had taken but most of the women did make the bunny head. After that we met up with the Canadians at our favorite lounge, Bolero's for a round of slushy drinks as they called them. We had a lot of slushy drinks in Bolero's as they were Jennifer and Leila's favorites and we didn't like them drinking alone! That's my story and I'm stickin to it!


We were all ready for bed that night and excited about heading off to Jamaica! Boy did that turn into quite the adventure...but that is for tomorrow!
Posted by okieladybug or okie_ladybug