Our fifth day on the cruise and last port stop was Jamaica. I had a mission in Jamaica of finding Ginger Beer for a friend of mine, other than that I just wanted to find a beach but once again we were not close to a beach and there is a story behind this one! 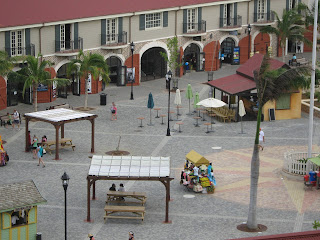 We had a great view of the port from our balcony and things looked so nice with the little shops and cobble stone paths. I thought this isn't the Jamaica I have seen on TV where people live in plywood houses with tin roofs! We got off the ship and shopped around a bit in the port area. The group of gals I was with decided that we needed to leave the immediate port area and see if we could find where a beach was. We stopped at the information booth and they said it was like $60 to go to the beach area. That just wouldn't do! Some how we lost the Canadian's in the quest but we gained Danita and Keith. 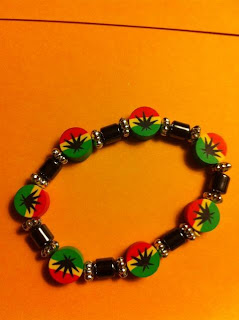 Danita showed us the beautiful bracelet she got, she was so proud of the gorgeous beads. I looked at the bracelet and then looked at her and said "nice marijuana bracelet you got there girl" and she was shocked and stated "I THOUGHT THEY WERE FLOWERS!". She then told us she had wanted to get a few more for her husbands aunts as presents. I think she was relieved that she didn't find more after she knew what was on the beads *okie falls out her chair laughin, picks herself up and catches her breath*.

This is a picture of Danita's gorgeous bracelet! *falls out of chair again*.

We left the compound, as I guess I would refer to it because it had walls and fences all around it and as soon as we left out there were local vendors wanting to braid our hair or sell us their wares and that is when we got to see the plywood houses with the tin roofs as well! Danita and Keith weren't sure they wanted to go to the beach since they had done a trolley tour. There were a few taxi drivers that came up and asking us if we wanted a taxi and we would refuse. Finally this gorgeous smooth skinned man came up and asked if we needed a taxi. I smiled at him and said "you are kinda cute and sexy ain't ya!". Well that was the beginning of a beautiful relationship, if ever so brief! He introduced himself as Michael Johnson and told us the company he worked for. He wanted $20 each for the trip to the beach. I flirted a little more...okay A LOT MORE, and he said he would take us to a nice beach and it was $5 to get in. Keith said "so you want $20 and then we have to pay $5 and $20 to get back?". Michael said the $20 was round trip. I kicked into the ever so Oklahoma southern charm flirting mode and got Michael down to $10 each round trip, and he would stay at the beach area with us so we didn't worry about getting back *okie smiles to herself remember how last year at St. Thomas she flirted her way into a cheaper taxi ride to Megean's Bay beach with Roberto*. I think what really got our fare cheaper was when I smiled so seductively at Michael and told him "Ya know I did come to Jamaica to get my groove on!". Of course it might have been him feeling sorry for me not wanting my old fat azz to be walking 20 miles to a beach, but I am going to choose to believe my version of seduction! 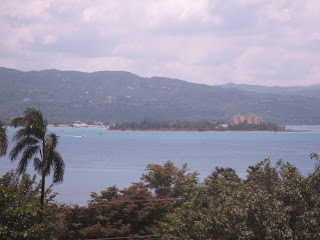 We had a 40 minute ride to Montego Bay and Michael was great telling us about the things we saw and answered all the questions we had. One of the cool things were the goats next to the road. He told us they come down from the hills during the day and eat the grass along the highway and then evening time they go back up to where their owners live. Keith asked if they ever lose a goat and Michael said "oh every now and then, just like we lose one of you" and we all cracked up laughing. 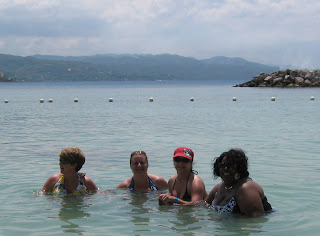 The beach area was gorgeous and there were a lot of people but not too many to make it crowded. We soon found a spot to set our towels and claim as our own. I didn't waste anytime getting in the water and looking at the fish swimming in the clear ocean. The other gals falled suit pretty quickly. Keith joined us after he went and watched the gals in bikini's dancing on the stage *okie isn't sure that is what Keith was doing but since he is a man she figures that was where Keith was hiding*. We got to see quite a sight while at the beach. There were two rather plump women swimming and they had on shorts and white wife beater T-shirts *okie hopes everyone knows what those are* and nothing under them. They came out the water and were all like OH EM GEE! Of course we had to point them out to Keith and I think I remember him shaking his head and mumbling something like "that just ain't right". 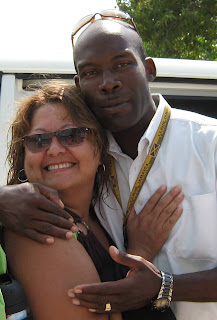 We stayed at the beach for a few hours and then found Michael for the ride home. Of course I had to get a picture of me and my new true love! he told me "put your hand on my heart so it looks good" and I am not one to be impolite and refuse such a nice person! *okie smiles devilishly remember it was a way to get even closer to him*.  I am sure some of you are wondering about the ring on his finger...well yes he is married and has two daughters. But I did make sure to tell him that if his wife ever leaves him to give me a call! Michael laughed and said "Shirley I love you!", and that ain't no lie, he did say that! *okie smiles and nods her head up and down* Michael did give me his phone number and I told him I would share it so that if anyone was in Jamaica and they needed a driver they could call him. So if you want a great driver while visiting Jamaica call Michael Johnson at 1-876-408-4107, he really was awesome and the rest of the group totally agreed!

We had to go through the security check like the other ports but at this one there was a slight problem. One of our duties was to gather sand and shells at the beaches we visited and BFF Karen got caught with hers and they took it. Well Sandie came back to see what the problem was and told one of the security people "That man over there let me bring mine in" and showed them her bag of sand....and then security took that as well! So there we were without sand! Once back to the cabin Wendi who was smart enough to keep her mouth shut showed us the little bit of sand she was able to smuggle in *okie wonders if Wendi is gonna have to be deported to Jamaica if this goes public* and luckily we didn't need a whole lot and were able to share it. To be honest we probably could have shaken out or bathing suits, shoes and towels and used that sand. So just a fair warning, if ya want sand from the beaches of Jamaica you better hide it in your shorts!

Our night back on the cruise was spent with the second Surprise Event which was Cricut Bingo. The winners got cartridges and I think there were a few other prizes as well but after Michael I just don't remember much *okie drifts of dreaming of her Jamaican man*. I didn't win at bingo, that much I do remember. We had open crop that night as well. BFF Karen, Wendi, Sandie and I went to The Savoy Theatre and watched the Late Night Adult Comedy and the comedian was pretty darn funny! We were ready for bed after that...at least I think we were.

The next two days were spent at sea and in classes doing our Cricut projects!!