Remember the picture of Lucy working on a layout? Well this is the layout she was working on! She did get a little upset when I made her go with a darker background patterned paper even though I tried to explain that the lighter color made everything look too washed out. I think she got over it though because I did let her dig through the embellishment stash and use whatever she wanted. 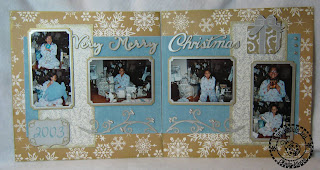 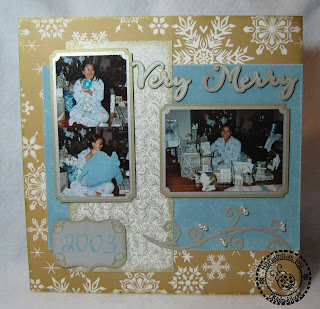 Elegant Edges, the swirls were cut from Joys of the Season. The photos were double matted on silver and then gold Mica cardstock. Lucy matched the blue cardstock to the blue of the pajamas my daughter was wearing. I told her she did good there.

The darker patterned paper really did look better than the original lighter paper that was planned. The title seemed to really get lost on the lighter paper.


The "Christmas" was cut from Joys of the Season, as was the present. Lucy added Robins 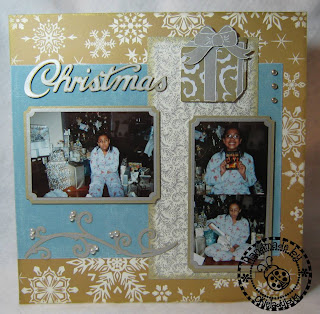 nest embellies to the swirls and I told her to add the 3 next to the present. Well okay actually I had to add the embellies because she kept getting the mini glue dots stuck to her paws.

I think Lucy did a pretty good job on the layout over all. I asked if she wanted to use the Janome Sew Mini and she looked at me like I was crazy and then I realized she wouldn't be able to reach the foot pedal from the chair. I told her I would work on adding a little ledge on the chair in the future if she wanted to try the Sew Mini. I think she rolled her eyes at me so I am taking that as a "don't even bother".
Posted by okieladybug or okie_ladybug