I still have some more pictures of my daughter to scrapbook from when she was a baby. I try to save them to scrapbook for when I am upset with her and that way I can look at the pictures and remember when she was a baby how I cherished her and loved her so much. Not that I don't now, it's just that the love for our babies changes over the years and becomes different. Much like Mama bears fighting to the death for their young but then pushing them out on their own when it is time. It doesn't mean we love the less, we just love them differently.

Anyway, here is a layout I did of her when she was in the bath tub. That girl could never get enough of being in the water! 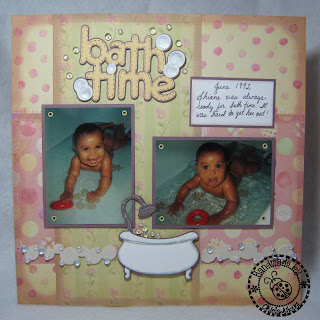 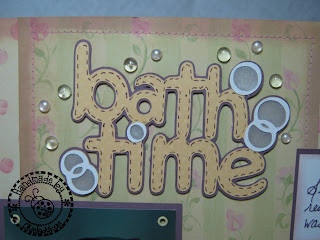 I did I thought the layout need a little something else. That is when I went back and added the little embellishments. I think they really made the layout look a lot different and so much better!

The clear ones are Decorative Accents. I believe they can be found at Michaels in the floral department. Years ago a bunch of us scrapbookers went nuts over them. Everyone was scrambling to find them. When the colors we didn't have or need weren't available we would use Tim Holtz alcohol inks to color them. I think the rage died down but I still use mine quite a bit. I think I have enough to last two life times. 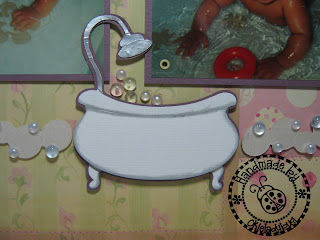 a little so I could just have the pipe and shower head in silver. I pop dotted the top layer of the tub for some dimension *okie wonders how many people get tired of her saying this*. I thought adding the little embellies to the top of the tub also made it look more festive *okie wonders if that is even the right words and decides she is too lazy to try and think of something else to say*.

For the bubbles on the title and border I cut them in cardstock and then layered with vellum. On the title I went back and cut with cardstock again so at least the centers would have the pearlescent effect.
Posted by okieladybug or okie_ladybug