I got another one of my purses altered and this time I used some Cricut cuts! 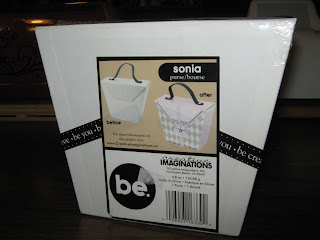 But first I want to show you what the purse looks like without being decorated. I thought I would post a picture so you guys could see what to look for if you decide you would like to do a purse and this way you know what to look for. I am not positive about the retail price, but I do know I got a great deal on them at GASC last year! 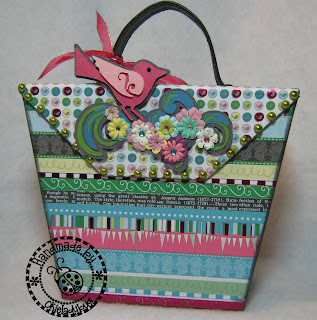 
I did all the decorating on the flap of this purse. I cut the bird twice in the grey 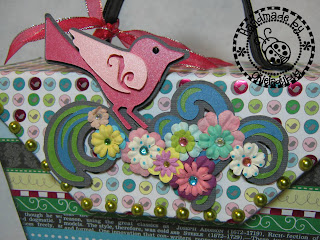 cardstock and then have a layer of chipboard in between. Since the image is off the purse flap I thought it needed some extra stability so it wouldn't bend easily. I welded the shadow of the flourish and the bird together.

After getting all the images layered and put together I added the flowers with some mini glue dots. I then added the hot fix gems with the IRock. I thought it still needed something so I added the pearls around the edge of the flap. The Want2Scrap booth was one I was looking forward to visiting at GASC. Since I am not attending this year I am comforted to know I can order line!

Here is another shot of the flap. I wanted to photograph it with the flap up to give 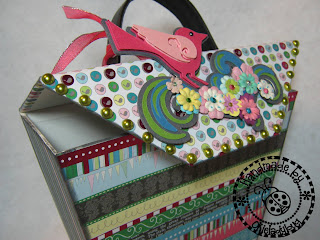 you guys a better idea of what it looks like and how it opens. I posted before about the closure but will mention again that it has a built in magnetic closure.

Oh and on this picture you can see how I layered the bird and pop dotted. I cut the bird body and the wings twice. I then pop dotted between the hot pink layers and then again between the light pink layers. Click the picture if you want to see it up close. Go ahead, I'll wait...*okie files lightly at her finger nails while waiting*. Don't ya think it gives it a lot better dimension and a more interesting look?! 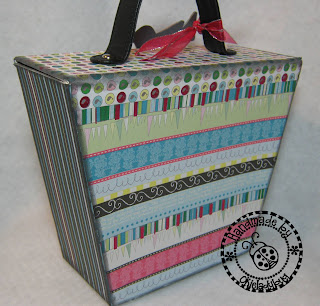 I do cover that as well. I don't take time to decorate the backs of the purses because I figure they aren't going to be seen anyway. I also cover the bottoms of the purses.

Here you can see the screw on the handle, which is included with the purse. I just use my Big Bit to punch through whatever paper I use to cover the top, following the holes that are pre-punched.


I still have 3 more purses to cover and not sure if I am bored with them yet or not. I probably should go ahead and just cover them and have it over and done with. Hmm, come to think of it I have a few Tim Holtz stacks I am dying to use...that might make an interesting purse for sure!!
Posted by okieladybug or okie_ladybug