Here is the sketch for the challenge. 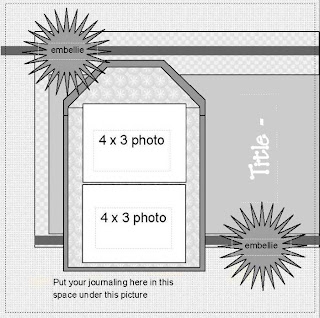 Since I wasn't sure everyone had a cart with a tag on it I made cut files for LAYOUT TAG in Plantin and George. It is on the same file, on different mats. The mats are labeled. I made the tag to fit two 4x3 photos.

Back in March of 2001 Shiane and I got ready to leave for school one morning and there was a squirrel stuck between the screen and the glass on the door. Everytime we tried to open the door the squirrel would jump out and try to get in the house. The neighbors dog was barking trying to get the squirrel and I was afraid if we left out the back the dog would get the squirrel, leaving a bloody mess for us to come home to later! I called the school I work at and told them I would be late because there was a squirrel stuck in my door. The only reason I took pictures at the time was because I was afraid they wouldn't believe me!! You can see Shiane behind the door, she kept telling the squirrel to get out. Finally I got a broom and eased the squirrel out and it took off running with the dog close behind, but luckily it got away!

I decided to use the pictures for the challenge. 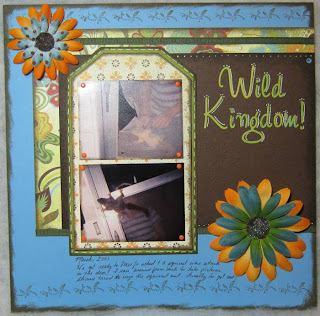 LAYOUT INFO -
- Tag is from Tags, Bags, Boxes and More
- Title is Stickers from Basic Grey Mellow pack
- Pattern paper is Basic Grey Mellow pack
- Solid paper is some I got at Big Lots *okie wishes she had more of it!*
- Brads are spare parts
- Eyelets are Making Memories
- Journaling is with Stampin Up Chocolate Chip marker
- Inking is with Tom Holtz walnut distressed ink
- Flowers are Petaloo's
- double sided adhesive foam to pop the tag mat and flowers
-stamping is with brown ink and SEE D's stamp