Lolliop Happy Birthday Card and How To Glue Small Pieces

This week for one of my Facebook groups I am posting  a birthday card it's a recreation from a card I did a few years ago. If you are a member of the group you know where to find the SVG file for download. 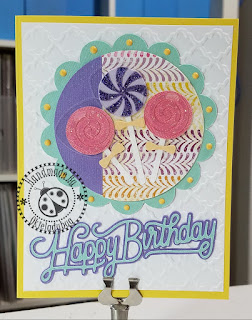 Back in 2014 I posted a card from the Stampin Up Sweets for the Sweet stamp set and I really liked that card. Even though I still have the stamp set I wanted to recreate that card and cut it with the Cricut Maker so I could test how the Maker cuts Transparency Overlay sheets. It is something I never cut with the Explore machines. I was pleasantly surprised how well the transparency cut!

The only issue with cutting this card was the mint paper and that was not the fault of the Cricut Maker but the cardstock. The cardstock fine sheen layer to it and it separated in a few places on the lettering when I was taking it off the mat but a dot of glue fixed any of those problems. The letters are a little less than a 1/16" thin and the Cricut Maker cut them beautifully! 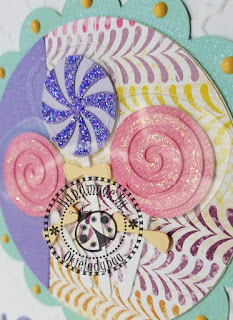 Here is a close up of the lollipops and you can see the Cricut Maker cut those beautifully as well as the transparency overlay material that I used for the lollipop "packaging". The Art Glitter Glue is simply wonderful and I have started using it as my #1 go to glue. The big bottle is much cheaper in the long run and you can always pour some in a smaller bottle for easy handling. It doesn't seem to warp paper like many glues do and it doesn't leave a shiny film if you over glue. To glue the transparency on I added a small dot of glue on the lollipop stick right below the circle and then added a small dot at the top of the circle on a raised part of cardstock. On the pink candies I used Diamond Stickles on the swirl top layer and on the purple I used Starry Night Stickles on the pinwheel top layer. Oh I also added a couple of squirts of Glimmer Mist Pearl to the circle layer and the sentiment. I think the pearl is my favorite of all the Glimmer Mists and I tend to use it more than anything else, especially when shaping flowers. 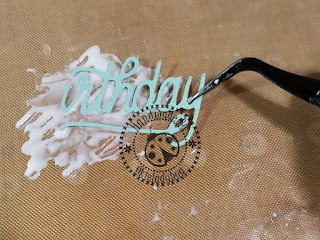 Now let's talk about gluing small pieces! There are so many fantastic things I would like to do but then I think "UGH!! I don't want to get glue everywhere!" and I will avoid a project or cut but while I was making this card I tried something *okie wonders if she might have tried this years ago but then forgot about it* for the small cuts. Instead of turning the cut upside down and applying glue I put a little Art Glitter Glue on a teflon sheet and then used my Tweezerbee's to dip the piece into the glue and let me tell you...GAME CHANGER!! I didn't have to worry about excess glue all over my cut and wiping off glue after I put my cut down.

I searched Amazon and found a 5 pack of 16" x 24" Teflon Sheets for $9.99. If you pick these up in a craft store you can pay that much for just one sheet. These are also larger than the sheets they sell for "heat press teflon sheets" and work wonderfully for that purpose as well. I know because I actually have this same pack that I found at a bargain store. The piece I used for making this card was what was left over from cutting a sheet down to use with my heat press. I keep this little piece in a drawer so it is handy for me to pull out when I need a non stick surface.
Posted by okieladybug or okie_ladybug