As I announced recently, Joy of Obsessed with Scrapbooking, asked me to be on her Design Team. This is my first project for her DT and we were asked to use the Creative Memories Traveler cartridge. When I received this cartridge I immediately fell in love with it and knew what my first project would be! My friend Chelle had brought her two nieces and her baby girl over to swim this summer. Makaylah had never been in the pool so I was a bit concerned about how she would like it. I did not need to worry! That baby girl got in that floatie and immediately started kicking her legs like she was an ol pro at being in the water! 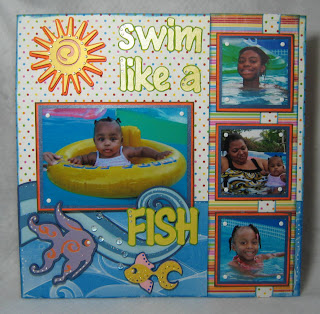 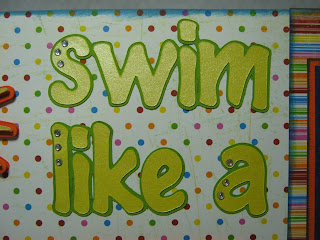 Design Studio was used to weld the shadow layer together for the title. I cut it in green and then cut the top layer in yellow "bling" cardstock. I added a few 3mm heat set gems to a few of the letters to make the title stand out a little more.

I so love the font on the Traveler cartridge! It reminds me a bit of magic marker and is a good chunky font, which is hard to find sometimes. 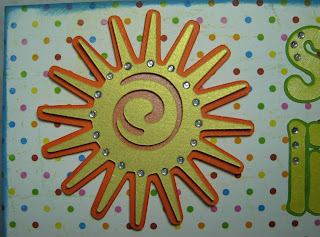 You might need to click the picture and make it bigger to see more detail. Nothing ever looks as good in a picture as it does in person! 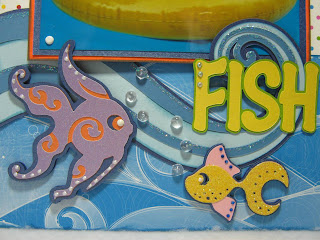 The curl wave was cut out of 3 different shades of cardstock, using the darkest blue for the shadow layer, light blue for the base layer and medium blue for the top swirly layer. I did ink along the light blue layer a little for added dimension. I added some Glistening Snow Writer thinking I could make it look a little like seafoam. That didn't work out quite like I wanted it to but I still like the look it gave the wave. I also liked the wave popped up and over part of the picture. It really made the wave stand out more. I think as crafters were are sometimes afraid to cover up part of a picture but we really need to get over that since it can really make an element stand out!

I did double shadow layer cuts on the two fish and pop dotted in between them. I added some 2mm heat set gems to the yellow and pink fish along the top and bottom fins and then dotted with the Viva Decor Pearl Pen for the eye. For the larger Purple and Orange fish I added a heat set pearl for the eye and then dotted along the fins with the Viva Decor Pearl Pen. My daughter actually suggested using the Decorative Accents, aka Skittles, as bubbles coming out of the fishes mouths.

If you would like to order the Creative Memories Traveler Cartridge you can order it from Joy at her CREATIVE MEMORIES WEBSITE.