This is one holiday that upsets me! I think it is always on a Saturday so we will never get the day off with pay for this fantastic holiday. I began to wonder where this all started and I was able to find the following information on the World Card Making Day website *okie thinks...who knew there was a website*...

Celebrating its sixth year in 2011, World Card Making Day is celebrated annually on the first Saturday in October. It's a day for the card-making community -- hobbyists, retailers, and manufacturers -- to unite and celebrate the connection and creativity that is the heart of card making. Join us in the fun on October 1, for World Card Making Day 2011!
And by the way, they are having a contest and giving away a chit load of awesome prizes!! If would like to see how to enter just go to World Card Making Day Contest.


I know a lot of folks think I started making cards after I got my Cricut and after some time of making layouts. However this is not true. I first remember making cards years ago.  I had returned to college to finish my bachelors degree when my daughter was a baby. During this time I was on state assistance and had no money for such luxuries as Christmas cards. I had, however, saved my favorite Christmas cards over the last few years and would use them to decorate a shelf in my house. Since I had those cards I bought some cardstock and cut those up and made new cards out of them so I could hand out some Christmas cards. After that I would make a card every now and then for someone special or a very special occasion. Years later, but before my Cricut, I had a few "Card Party" events at my house with my girlfriends. Generally this was at Valentine's day and I would have supplies for them to make Valentine cards for those they loved, or sometimes just liked and I think in one or two cases just tolerated. Now, as you guys know, I am an avid card maker *okie thinks...but not a card sender*. 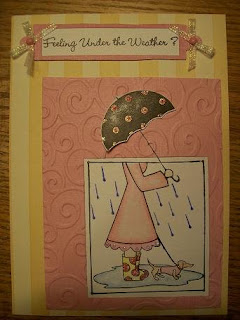 This card was one of my first ever I posted to my blog, back from March of 2008. I remember thinking that I had done a nice job on it but now as I look at it I think it just doesn't look "finished" LOL.

I had gotten a set of My Favorite Things stamps at my LSS and was trying the "magic colored pencil" technique. I remember thinking how cool it was to use that method to color images but thought it took way too long! I most definitely prefer my ProMarkers these days and can color an image in about 1/20th of the time!

To be honest I am not really even sure of the purpose of this post *okie thinks her little homemade cough remedy still might be effecting her brain this morning* but you do now have the history of World Card Making Day and the history of how I got started making cards. So with that my dear friends....

GO GET YOUR CRAFT ON AND MAKE SOME CARDS!!