You Highlight Up My Life - layout

Happy New Year everyone! Since my last layout of the year was about hair I thought it appropriate to start out 2011 with a layout about hair! This is one of the 3 layouts I did a few weeks ago. 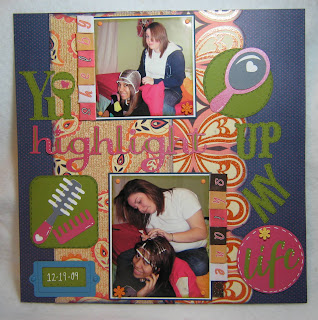 The patterned paper is from a $5 pack that I picked up at Big Lots on one of Linda, aka LGuild, and I's excellent adventures and I thought the colors went well with the colors in the pictures.

I used several cartridges for this layout. The title words were done with Graphically Speaking, Lovely Florals, Once Upon a Princess and something else that I can't remember. The mirror and come and brush cuts were done with Slumber Party. 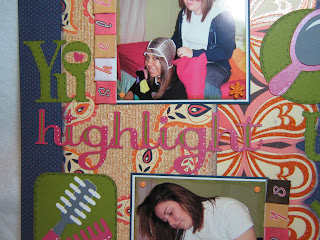 in too well with the patterned paper. But what's done is done! It is easier to see in person than in the photo.

I cut the highlight in green also, using the hide contour feature for the open spaces in the lettering *okie is so all about layering*. I added white dots with a white gel pen. For the other letters I just did some faux stitching.

You can see the cuts from slumber party a little better in this picture. I think if you have girls to scrapbook about you really need this cartridge! There are so many neat things on that cartridge. I actually have another layout in Design Studio ready to cut using Slumber Party.

I didn't think the layout needed journaling because the pictures and 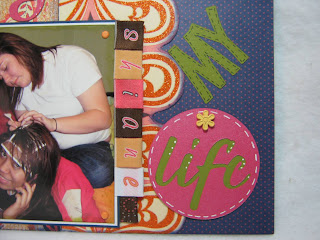 title pretty much tell the story. I did want to put their names since my friend Linda, aka LGuild, tells me all the time that I need to include names for people looking at my layouts and not knowing who the people are *okie will always believe Linda, aka LGuild, is just too dang bossy*. Oh but back to the names. I was trying to think about how to do them and I looked up on my handy dandy pegboard and saw these ribbon letters that my friend Softbrn sent me a long time ago. I was so excited about how well they matched the layout! They had a little piece of adhesive on them so all I had to do was apply to the pictures.

The little flower brad is a Stampin Up brad.

Overall I like the layout and the colors. I just don't like the one issue about the "highlight" word.
Posted by okieladybug or okie_ladybug