This is the companion, so to speak, layout for the one I posted 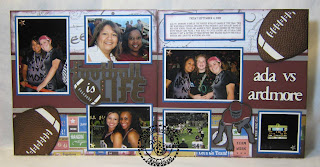 yesterday. The pictures were taken the same day, just later that night. It was really hard to choose pictures for the layout but I narrowed it down to the ones I felt my daughter would appreciate the most, and of course the ones I liked the most *okie always scraps pictures she likes but figures it sounds better if she at least acts like she considers what her daughter might like*.


I think sometimes it is hard to see a two page layout when it is photographed with both pages in the picture but I like showing the overall effect of the two pages next to each other *okie wonders if she should mention they can click the pictures to make them bigger but then decides she won't because she says that all the time*.

But I also like showing each page close up, so that is what I am doing here. I used Sports Mania for all the cuts, except the "ada vs ardmore" and that is with Base Camp. I love the font of Base Camp because it is a good solid font and the shadow on it is nice. The patterned paper is DCWV High School stack. 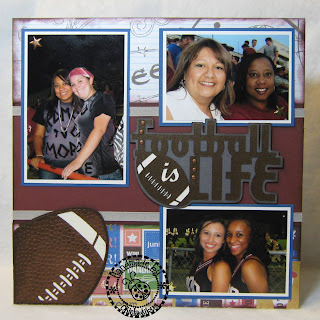 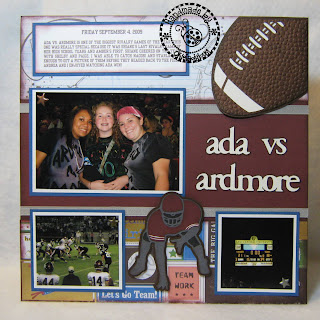 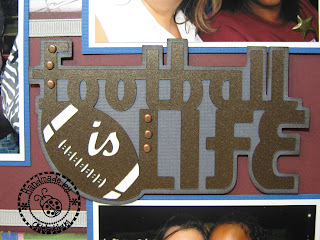 to be cut for it and it pretty much summed up the pictures and the night. I cut the shadow base from grey and then the layer with brown Stardream Mica. I decided to add a few brads to just add some extra embellishment.

I don't know if you can see in the picture but I did use a background stamp and a versamark pad to stamp the maroon paper since it looked a little too simple. I liked it better after I added the light grey ribbon also.


I think this football is what made the layout! If you have me on facebook 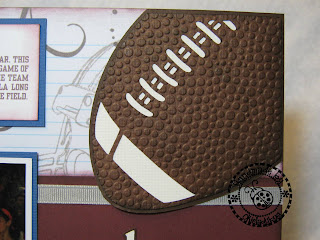 you might have seen the preview picture that I posted the other day of this cut. I used the Cuttlebug Tiny Bubbles to emboss the brown layer and make it look more realistic and it turned out great! I inked with dark brown to add some shading around the edges and then also lightly, every lightly, over some areas of the football. I inked before layering so I didn't get the ink on the white areas.

The next two days will also be layouts. Featuring one of my favorite subjects....MY LUCY LULU!! *okie knows that to know Lucy is to love Lucy*.
Posted by okieladybug or okie_ladybug