Lucy the pissed off Ladybug - layout 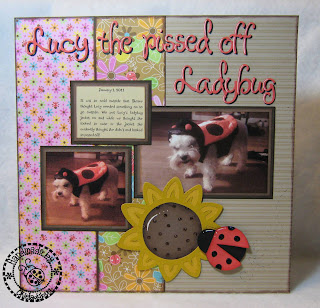 a few weeks ago. I wish the pictures were a little more clear but I took them with my cell phone and the lighting wasn't too good but the expression on Lucy's face was just too much to pass up to scrapbook! Her expression is truly priceless!! My daughter and I laughed until we cried at her looking pissed off and my daughter said "MOM!! SHE IS MAD AT YOU!"

I am not really sure what the paper is since it is some that someone was nice enough to send me because it had ladybugs on it. The brown paper is some I got in Hobby Lobby's open stock. I used Lyrical Letters, Doodlecharms and Stretch Your Imagination for this layout.

Lyrical Letters didn't have a shadow for this font so I made one. I don't know 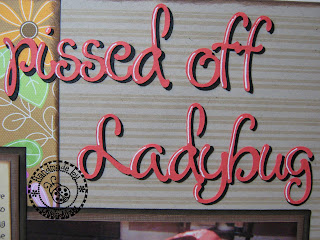 what it is about shadows and layers but I just seem to have to have them. *okie says in her best Edward Cullen voice* It's like a drug to me *and then okie falls out her chair laughing*. But seriously.....I really do gotta have the shadows and layers. I added some lines on the letters with a white Signo UM-153 gel pen. A lot of times just adding a little doodling to lettering can really make things POP *okie all the sudden has pop goes the weasel playing in her head and hopes it goes away*.

The sunflower is from Stretch Your Imagination and while the colors 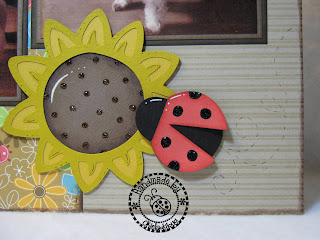 don't seem to go well in the photo they do look good in person. I inked around the center of the sunflower, added some dots on the petals and then highlighted with the white gel pen. I also added Cinnamon Stickles to the dots in the center of the flower

The ladybug is from doodle charms and I didn't cut the eyes because they looked goofy to me. I inked around the ladybug wings and then a little white gel pen highlights. I also added some Black Diamond Stickles to the dots on the wings.

This is the last of the layouts for a little while. Next week I will be taking part in Enfys's blog hop she is having over at GOING BUGGY. She has some fantastic giveaways going on right now so if you haven't checked it out you might wanna head over there and enter! Oh I will also be having a giveaway when I participate so be sure to keep your eyes peeled!
Posted by okieladybug or okie_ladybug