My mother was always close to her sister's, even if they lived half way across the country and she remained close until her death. Growing up I always looked forward to seeing most of my cousins and I am very close with them today. My cousin Shelly came in from Ohio for Thanksgiving and my niece Amber thought "us girls" needed an evening of activity together since we don't get to see Shelly often.

Amber booked us at a salon for pedicures. We had a blast and I knew I had to do a 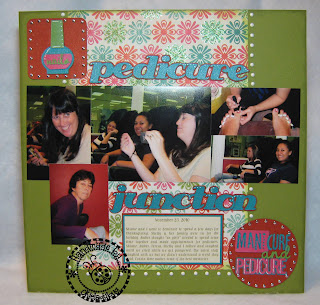 layout of our pampering. I don't think I have ever laughed so much in my life as I did that night in the salon. I think everyone of us had to dry our eyes from laughing so much. Now if you ask what was so funny I really have no idea, I only remember the good company and laughter.

I do remember that the tech's were laughing and probably laughing AT us instead of with us. We have no idea what they were saying since they all were speaking in some foreign language.

I used Slumber party for the circle and square embellies and the title was with Hello Kitty Font. The glitter paper is from a My Mind's Eye pack.

The white pearls are some from Imaginisce that I got at Michaels for 40% off during one of Linda, aka LGuild, and my excursions. 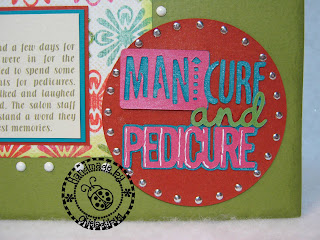 Cricut cut. I also did it for the other Cricut cut. I used regular cardstock and then also some Hot Pink Stardream Mica cardstock. I was thrilled when I saw the two cuts I used thinking the would work perfect for the layout. I actually got the cart because I thought it would be good for some of my daughter sorority layouts.

There are some more cuts on the cart I plan on using on some other layouts as well.

I love the Hello Kitty Font cartridge. There are actually a couple of different font 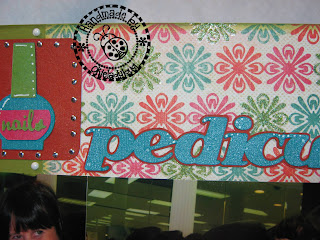 options. I have the HK Greetings which if you guys remember I did cards with it a few months ago. I was able to score the font cartridge on eBay for a very decent price and couldn't resist.

On the blue I used some Glimmer mist to bling it up a little and then added a few dots with a white gel pen.