This is yet another layout I did a few weeks ago. My daughter had her first college formal and of course such an event has to be scrapped! 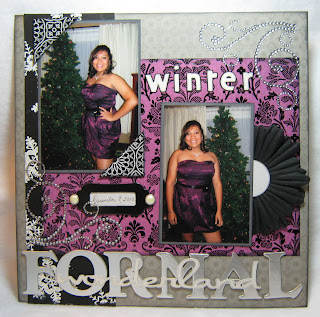 with the pictures, boy did I luck out! The patterned paper is DCWV All Dressed Up. On the black strip I heat embossed some snowflakes and actually did a really crappy job but the other elements covered up most of the areas that looked bad *okie makes a mental note not to be on the phone when she is heat embossing and also to always always use her embossing buddy*.

I cut the flower in half and layered it then cut a 2" circle out of some Stardream Mica for the center. The flower is one of those huge ones that come in a container of plain and polka dot in the same container, I believe they are found at Hobby Lobby.

I added chipboard photo corners on one of the pictures. 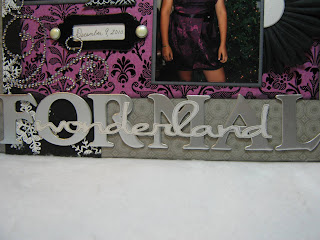 Scrapbook Convention last June. I was able to get the letters for $2 for the box and they regularly ran $8. They all had the shiny metallic finish and I got some in blue, pink and silver.

I then cut winter and wonderland out of Opposites Attract. I did the shadow for the winter but the font for wonderland didn't have a shadow feature so I outlined in black a little to make it stand out a little more. You might need to click the picture to see it better. I love layered titles. Well I don't want to use them all the time because that would be boring but use of them occasionally is really a neat effect. 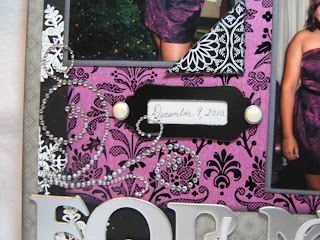 I just used a chipboard bookplate and added the date in it. I think the pearl brads are a little big for the bookplate but I am not changing them now.

The rhinestone flourishes were get another GASC find. Both came in the package and the package was $1. I was able to get several different styles and also got some in pearl. My friend Linda, aka LGuild, and I can't wait to go back next summer!
Posted by okieladybug or okie_ladybug