TO EGG OR NOT TO EGG 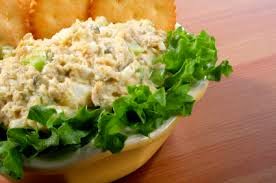 All my life all I have ever known about how to make tuna salad was to put in the following ingredients: tuna, miracle whip (or mayo depending on what's in the fridge), pickle or relish (again depends on what is on hand), egg and pepper. Now for variety I add the following if I have it on hand: celery, onion and tomato. I do prefer to add celery all the time but I didn't have any the other night. I guess folks add a lot of different things to their tuna salad, as I learned from the Facebook discussion.


I thought the conversation was rather entertaining and thought I'd share it!

ALISA: I'm coming over for supper! Lol
ME: Come on! I made a big batch! LOL
PAT: OMG! That sounds soooo good.
ANN: You put eggs in your tuna salad? Is that common in OK? It's not on the East Coast - well at least not that I know of and I've eaten lots of tuna!
ME: The question is...You DON'T put eggs in your tuna salad????
BETTY:  I do in my tuna...secret ingredients...a little marzetti slaw dressing and a little gerkin pickes
ANN: LOL obviously I don't
ME: LOL
ANN: how many do you put in?
ANN: And why don't you call it egg salad with some tuna?
ME: Because it is tuna salad
MELODIE: Tuna salad isn't, well anything, without eggs in it lol
ME: Egg salad wouldn't have tuna in it...that would be ludicrous!
DANITA: I eating tuna right now!! Yummy!
DANITA: Oh Shirley, mine has eggs, pickles, onions, mayo and a dash of mustard and a dash of sugar! Oooooooweeeeee!!
ALISA: If I didn't make spaghetti I would have!!!! Lol
ANGEL: Never heard of eggs in tuna either... I also live on east coast... are we being sheltered??
JERI: Love the eggs in tuna salad.
STEPHANIE: Im in NC, eggs do go in Tuna salad if its done right!! lol
CAROL: Yummmm .... hard boiled eggs in Tuna salad is a MUST! The flavor combination of tuna and egg is amazing. I also like egg with chicken salad and ham salad too.
GLENDA:  make my tuna salad with eggs, a little bit of onion, a smidgen of mustard, sweet pickle relish and Miracle Whip. Good stuff! And I too put eggs in chicken and ham salad.
LACY: OMG...never heard of eggs in tuna salad!!! What a great idea!!! GOTTA try it this weekend!!!

I am always amazed about how social media keeps us informed about differences in just about everything in our own country. Now let me ask y'all...Egg or no egg in tuna salad?
Posted by okieladybug or okie_ladybug