So last night I made Chicken Enchilada Casserole and posted this picture on Facebook. My friend Melodie asked if I would post the recipe. I thought it might be easier to post it on here so it can be found easily. 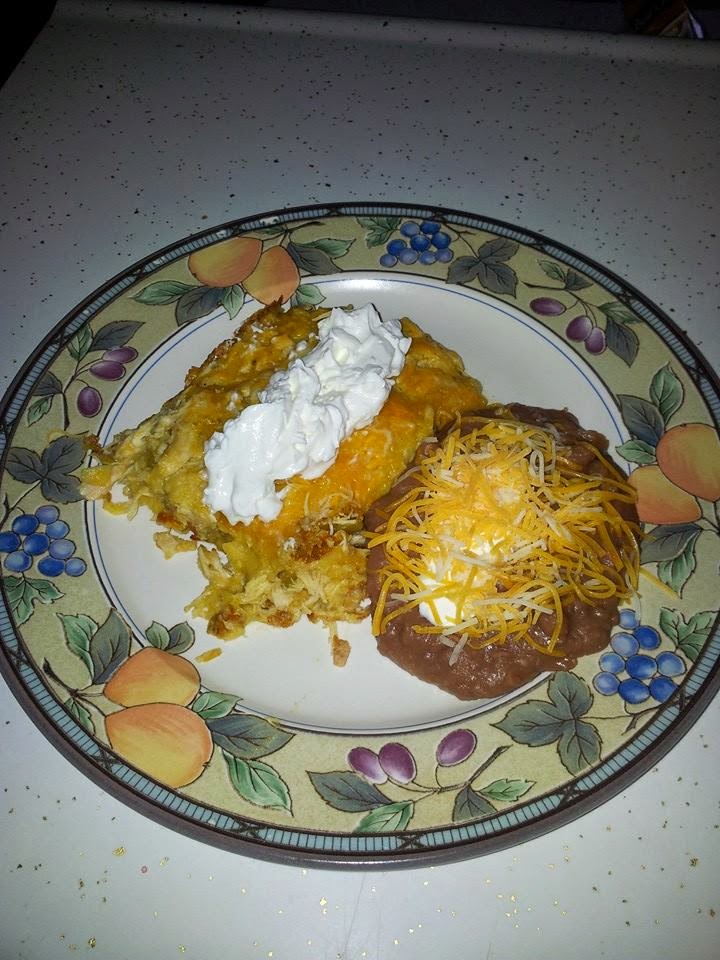 Boil chicken and shred, reserve some broth (always save all my broth and pour them into mini loaf pans and freeze them in one cup increments, that way I have broth for other recipes when I need it). Preheat oven to 400 degrees. Dice and saute onions. The amount of Jalapeno Peppers depends on taste, I put mine in a food processor and blend a little to chop them up more. Combine the shredded chicken, soup, chilies, onion, about a cup of broth and jalapeno peppers and mix thoroughly.

Spread about 3/4 cup of the mixture in the bottom of a 9x13 pan. Layer tortilla's, mixture, cheese and repeat until all ingredients are gone, making sure top layer is shredded cheese. Cover with foil and bake approximately 30-40 minutes. Remove foil and broil until cheese is slightly brown.

I served mine with some refried beans and would have had some salad with it but I forgot to pick up salad mix at the grocery store. I would make rice but I don't know how to make it and most of the boxed rices taste kinda crappy to me.

On a side note...I use to make this frequently when we would spend quite a bit of the summer at the lake with my aunt and uncle and cousins. We would take turns with making supper and for one of my nights we always had the Chicken Enchilada Casserole. To save time and be able to enjoy the day on the lake I would cook 2 of these ahead of time and freeze them in the pan. Once they were frozen I would take them out of the pan and vacuum seal them or double wrap them in foil and put in the freezer. They freeze very well! To heat them up I would put them on the grill in foil while we got showered and cleaned up and ready to relax for the night.
Posted by okieladybug or okie_ladybug