In order to keep things short I will make just one post about the cruise and not bore you with all the details, especially since I posted some of the information in my "Going Home" post.

We made it to the port just fine and the parking we used was great, it was very close to the port and the employees were very courteous, except the guy who took everyone's bag but our. We didn't tip him even though he was kind of standing there like he was expecting one. 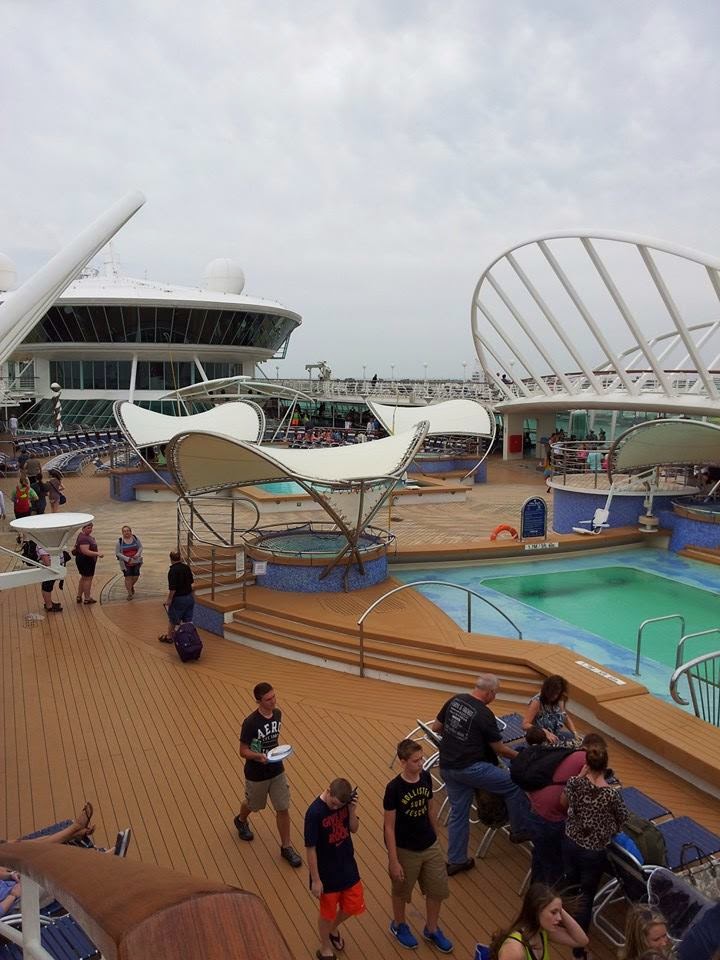 It was rather cloudy and dreary when we got on the ship but we were just glad to be in the zone of relaxation.  We had some time before our room was ready so we explored the top deck a little, went and got something to eat and got a drink at one of the bars. This year we went on Royal Caribbean' Enchantment and last year we were on Carnival's Ecstasy, the ship this year was nicer than the one we were on last year and a bit bigger as well. 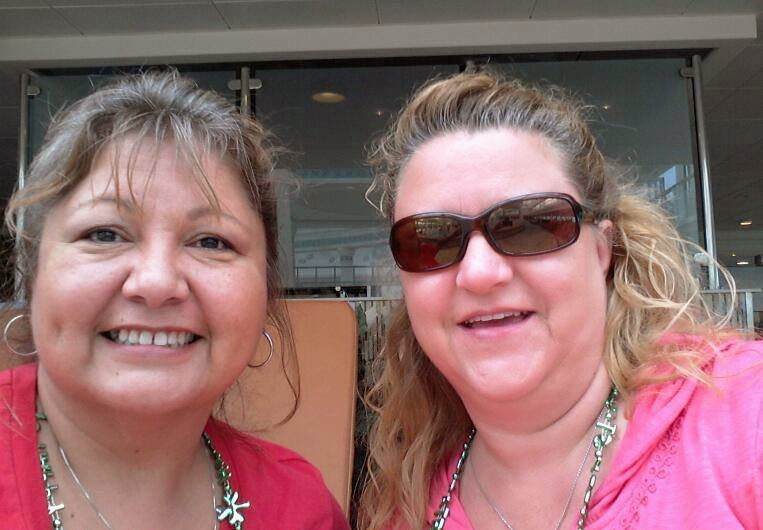 We decided to make our phone calls to home so we could put our phones away, Karen calling her mom and me calling my daughter. I snapped a picture right before we turned off the phones. The cruise was nice, the food was okay but not spectacular. Our room steward, Sadat, was very friendly and helpful but I think they always are, aren't they? The shows were very good and I loved the outdoor movie screen even though I never watched a full movie on it. We did go to one of the indoor movies, Delivery Man, missing the first of the movie but it was still good. Karen took a nap during the movie, she does that during all movies unless she has food to last throughout the show. 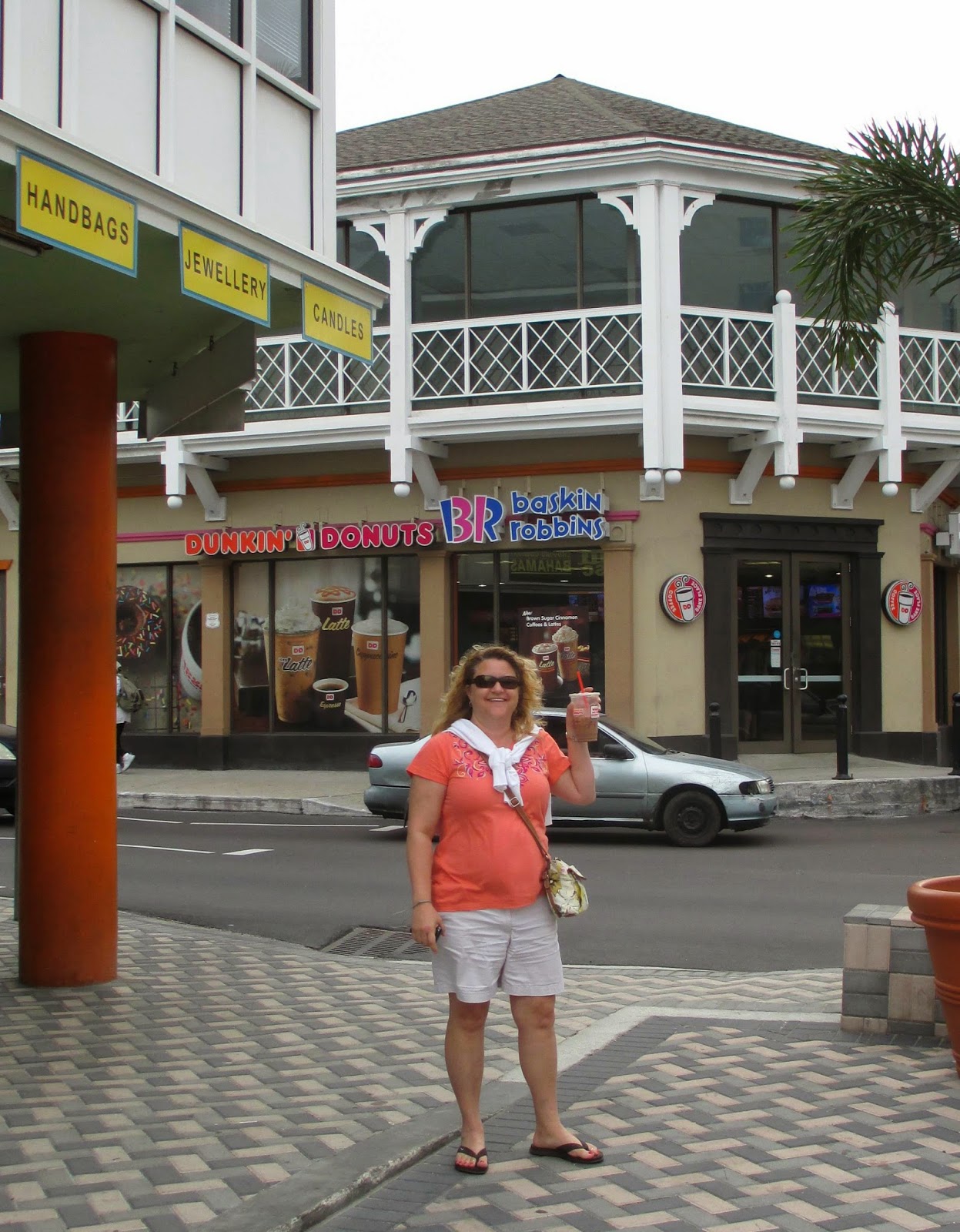 We didn't get to make it to Coco Cay because of the high winds and the tender boats not being safe to use during such times so we headed on to Nassau and spent a day and a half there. We did take part in some trivia games in one of the bars and won at Tri-Bond trivia with the perfect score of 18, evidently the more alcohol I drink the smarter I get because at first I was stumped on a few but by the time I finished my Lava Flow I knew the answers. Our big prize was a pen and keychain, well we thought the big prize was actually knowing we were smarter than a 5th grader. The first day we walked around a little but most of the shops were closing up. Karen loves Dunkin Donuts and I had found out before going to Orlando there was one close to port and she was excited to get her ice coffee. 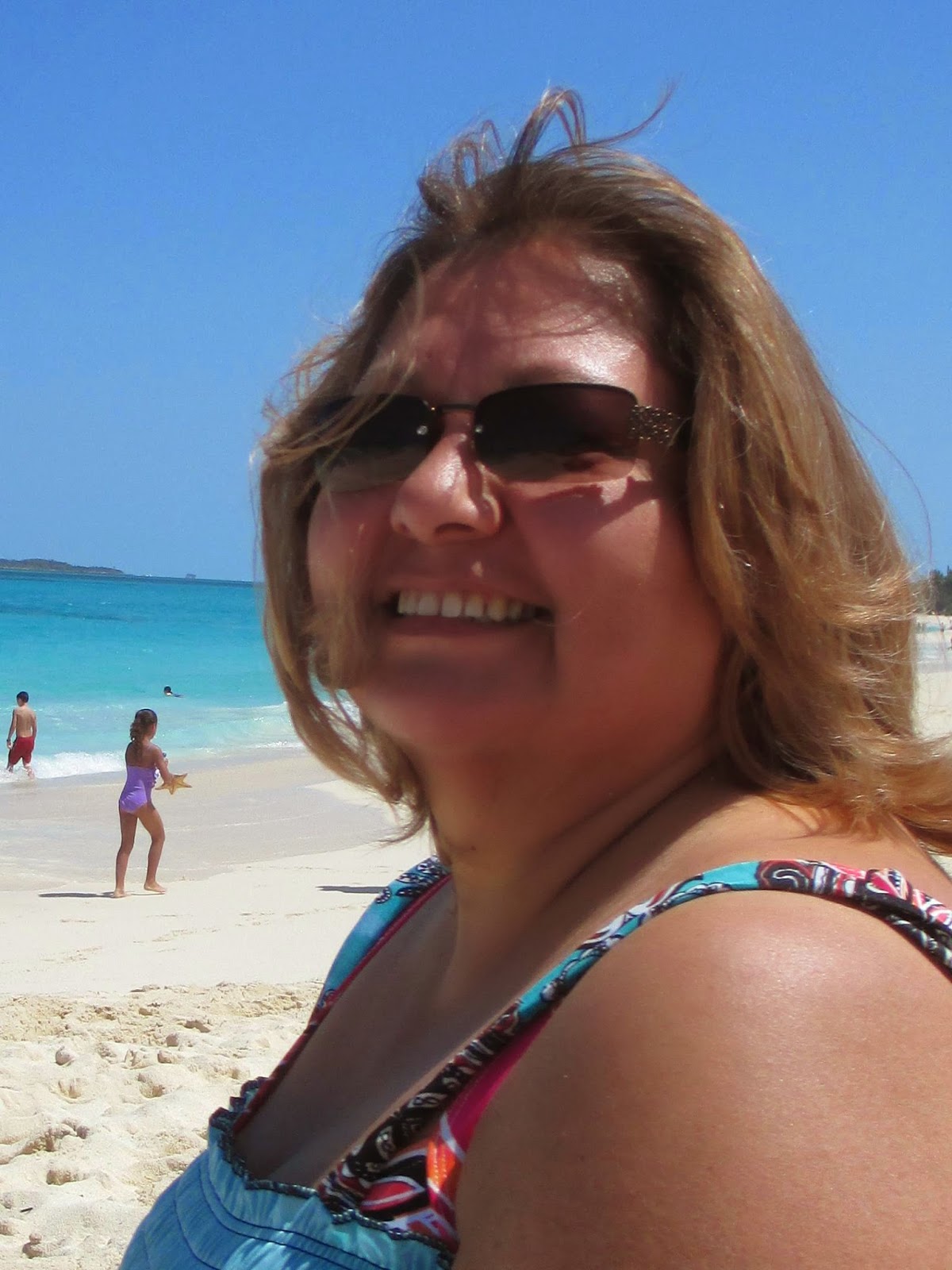 The next day at Nassau we decided to take a ferry boat over to Paradise Island and go to the beach. It took us forever to get to the free beach, which is Cabbage Beach, only because we had no idea where we were going and when we got to the end of an area they told us we needed to go back the way we came. Once we found the beach it was quite gorgeous. There were a lot of people coming up and trying sell things but if you told them no they were very polite and didn't seem to come back if they remembered you told them no the first time. The water was rough but the most awesome blue! We did get in the water and Karen got a kick out of me getting knocked off my feet and the water tossing me in backward somersaults. I was laughing so hard that I couldn't even answer a woman who was asking me if I needed help, she was laughing too though. I ended up with and in every part of my swimsuit imaginable. Our plan was to return to the ship, rest a bit, get cleaned up and then head out to the Fish Fry on shore. We made it to resting and Karen didn't get back out of bed until the next morning. I spent that evening going to a magic show, a game show and to the upper deck for the dance party.

Our day at sea was spent doing things on the ship. I took part in a cake decorating contest and my partner was an older man who just started throwing all the items on the cake. The cruise director was pouring alcohol on the cake making it hard to do anything with, it turned out to be a big mass of mush and needless to say we didn't win. We did a few other trivia games, which we didn't win but had fun anyway. We made sure we got our thing packed up late that evening before going to dinner and our luggage outside our cabin so we wouldn't have to worry about it. Since the ship was moving so slowly back to port the ship bobbed quite a bit even though the water was calm and several people talked about feeling woozy. I was actually okay and I must be getting use to the motions after being on several cruises. One poor girl was ready to get off the ship immediately and said something about rough seas and I had to laugh and tell her that the sea was calm and shared how rough the seas were on my first cruise where they had to lock the doors to the promenade deck because the waves were crashing over the railing. I'm not sure she will ever go on another cruise after I told her about that experience.

After making sure everything was in order for the next morning we went to bed so we could disembark the ship first thing because we had a luncheon to attend with some very important people...OUR WONDERFUL CRAFTY FRIEND!
Posted by okieladybug or okie_ladybug