Linda and I had a blast on Saturday during our day out. We hit Tuesday Morning and didn't find a thing. We picked up some photo box storage things I use for buttons and small flowers at Joann's. At Hobby Lobby I found another photo box thing and some bins I am going to recover for my beach bathroom. Neither of us found a thing at Micheal's we wanted. It's getting to that point for the both of us anymore, there just isn't much we feel like we need or have to have and we are trying to use up some of the stuff we have which shouldn't take more than ohhh let's say about 20 years!

The purpose of our trip was to go to And Bear Makes 3 for the class on the matchbox using the Graphic45 French Country collection. We arrived about 2 minutes before class started, of course it was my fault since I needed to hit a vapor shop and pick up some supplies. 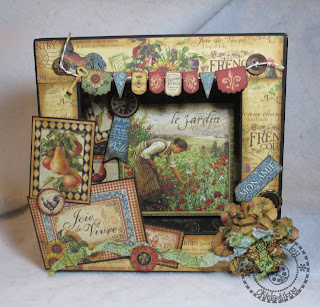 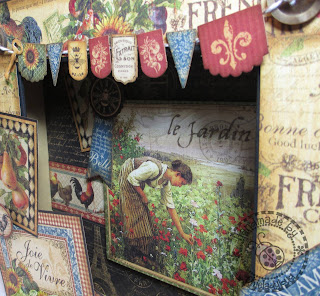 I was a bit confused as why it was a matchbox until I got there and saw that the drawer slid out and that the bottom of the drawer was decorated as well. In the picture online, which I posted last week, it just looked like a frame with a picture in it, at least to me. I took this one so you could see the dimension of the drawer better than just a straight on picture.  I do love the banner at the top and how the side images over lap the square opening. 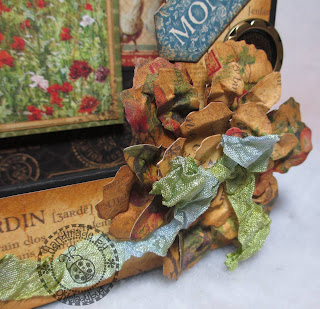 The flower we made was cut out using a Tim Holtz die. All the pieces were ready for us so we didn't have to do much other than trim a piece of paper here and there and then cut out the images we wanted to use. I decided to crumple my flower instead of just using it straight. 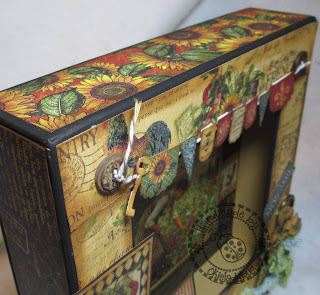 I am generally a practical scrapper. I want my projects to have a purpose for the most part. For the life of me I can't think of one purpose for this box other than for it to look cute on a shelf and gather dust. My daughter fell in love with the picture when I showed her the project we were going to make and asked if she could have it when I got it made. As promised, it will become a part of her collection of things to move to her house when she moves out *okie is beginning to think that will never happen but still holds hope* to a place of her own again.

I am hoping to get another card finished this week but that dang Candy Crush game is giving me fits...okay I might be a teeny bit addicted to it but just a teeny bit, and I can't seem to focus on crafting when I need to send lives, extra moves and tickets to my friends!
Posted by okieladybug or okie_ladybug