Did Some Vinyl Stuff

I made a double wall tumbler for my cousin Shelly to take to her last Sunday. I forgot to take a picture though! But anyway when I was going back on Wednesday I asked her if there was anything else she was wanting and she told me her husband was wanting to know if I could make some decals and sent me a picture. It was a simple design and I told her it would be no problem with the Make The Cut program. 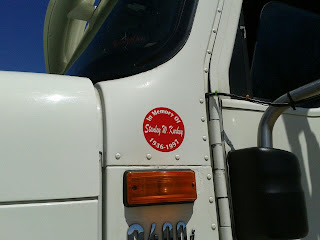 It really didn't take long to do the design in MTC and I think they were fascinated by how simple it was for me to make the decals. My cousins husband, Donny, wanted some memorial decals for his truck. He had seen some on some other rigs and thought it would be nice to have one for his. I did end up cutting about 6 small ones and one large one. I also cut out a cartoon character he draws frequently.

Shelly posted a picture of the decal on Donny's truck last night. He originally wanted the larger one but decided to use two small ones, one an each side at this location. I think that size worked perfect for that area. I believe those were cut around 4 inches. 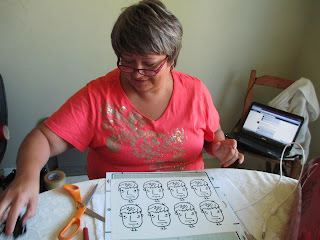 Here is a picture of me where I just got finished weeding the cartoon characters Donny frequently draws. I wanted to show them how I could scan something and import it into Make the Cut and then cut it out. And yes I have to have reading glasses in order to see close up. It sucks getting old! But in the grand scheme of things I am glad I have my eyesight, even if I need contacts and 240 pairs of glasses. Okay, maybe not that many but I do have several pairs of readers laying around! 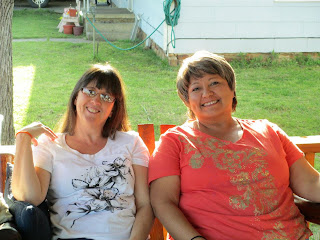 Remember my post about my cousin Shelly a few days ago? Well this is her! Actually both of us. I am going to have to see if I can find a picture of us together when we were teenagers and then do a "then and now" layout.

They moved back to Ohio not long after getting married and time with them was greatly missed. I did however go spend several weeks a summer with them and I have to say those visits are some of my best life long memories!