At first glance I didn't care for the Graphic45 Le Cirque collection but when I started searching images I found some fantastic projects so I couldn't resist! I had gotten a few sheets that would be good for backgrounds but once I did see the projects my friend Helen was nice enough to pick up the other sheets I wanted. I of course split the collection with Linda. 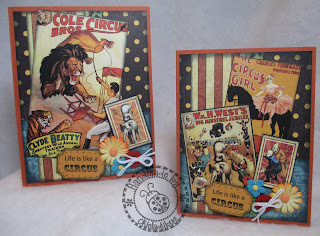 I wanted to use up some of the "poster" patterned paper and this was the best way I could come up with. Each of the card bases are the same as are the embellishments. They look different due to each one having different "posters" as focal points.  I did include a small "postage stamp" image on each card as well. I did punch a border and add to the cards but it is a bit lost behind the images. I think I should have put it on the other side of the striped paper. 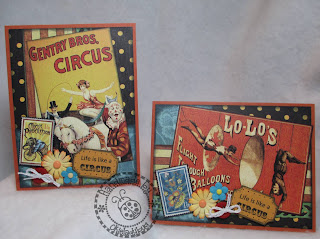 Some of the "posters" were rather large and I used them in a horizontal fashion instead of vertical. I did have to remember to print my sentiment on the inside of the card horizontally for those cards. I did a search and found a Circus font on dafont.com and then used the feature to outline the text in the Hallmark Card Studio software. I can't tell ya how much that software comes in handy and I am still appreciative of Linda sharing it with me! 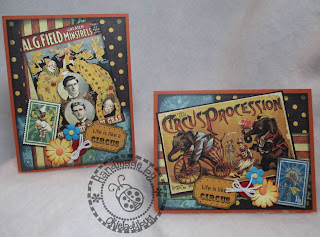 Here is a picture of the last two cards of the six I made. I wanted to show all six so you could see how different each one looks while still using the same embellishments. I think this will help me use those sheets of patterned paper with such images in the future as well. Matter of fact if I remember correctly I think I did this same thing a few  years back with a sheet of Graphic45 I was given.

The little ticket on the front was printed in Microsoft Word on a piece of 4x6 cardstock and then I just cut each one to the size I wanted and then punched the corners with the Ticket punch.
Posted by okieladybug or okie_ladybug

Email ThisBlogThis!Share to TwitterShare to FacebookShare to Pinterest
Labels: A2 Card, Birthday, Graphic 45, Stampin Up