Cousins Are A Blessing

I think one of the things I enjoy most in life is when I get to visit with my family. I don't have any family other than my daughter, who live in the same town as I do so when I get to see family it just makes life a little better. This past one of my cousins has been down from Ohio and I got to make two trips up to Seminole where my Aunt Betty lives to spend some time with her. I don't get to see Shelly often but anytime we see each other we can turn back into those giggly teenage girls.

When I was 15 my Aunt Betty and her family moved from Ohio to Oklahoma. I remember feeling sorry for my cousin Shelly because it was her Senior year and she was going to have to attend not only a different school but a different school 1,300 miles away from all the friends she had her whole life. I think it did help that her boyfriend moved down as well so he could be close to her. On a side note, they started dating when she was 14, got married when she was 18 and in June they will celebrate 31 years of marriage. Since I lived in the country, and there wasn't much socialization going on, Shelly and I become very close during the few months they lived at our house while getting their place ready and it continued for the next year until she got married. 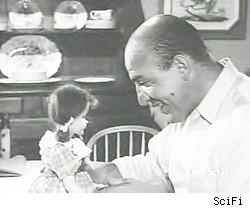 One of the fondest memories I have of growing up and having Shelly for that year in my life was our nightly ritual of watching The Twilight Zone. Way before cable, which most of you probably remember, there were only like 5 channels available and reruns of old shows were always fun to watch and one of the stations ran TTZ every night right before it was time for us to go to bed. One night in particular I remember having to walk Shelly home because she was too scared to walk herself home down through the pasture. I still remember the episode so clearly....Talky Tina. That doll first said "I love you very much" but after the dad was being mean she told him "I think I hate you" and by the end of the episode she was saying she hated him and one crucial statement was "I'm going to kill you" the show ended with him at the bottom of the staircase *okie suddenly wonders if this was one reason she never let her daughter have a talking doll*. Now I never was one to be scared of anything, probably because my daddy always said "there is nothing out in that dark bigger or meaner out than you" and of course I knew my daddy didn't lie, but that night I was a little frightened on my way back home and believe I ran through the pasture back to the safety of my own safe house.

While I know my cousin often thought the move was not good for her family I have tried to explain to her that I truly believe God sent them to Oklahoma to save me. When they first arrived I was at a pretty dark place in my life and I have always felt it was a blessing of God they became such an integral part of my life when they did.Shelly did a lot for me that she never realized. She taught me how to drive, how to accept others, how to see the good in people and to laugh at myself, all things I likely would have never done if I wouldn't have had that year of closeness with her. Even today, some 30 years later we can say one word and bust into fits of laughter, ya know the kind where tears stream down your cheeks and you are holding them because they hurt but are trying to hold your stomach as well because your sides hurt...yeah that kind!

I sit here smiling to myself because remember other stories of that year with Shelly and realize I have so many good memories with quite a few of my other cousins as well and I have to admit...MY COUSINS ARE A BLESSING TO ME!
Posted by okieladybug or okie_ladybug