I thought I better get to posting the Shadow Box Layout that Linda, aka LGuild, and I worked on over the weekend since I had talked about it several times. The flowers are from Flower Shoppe and the frame around the picture is from Art Philosophy. 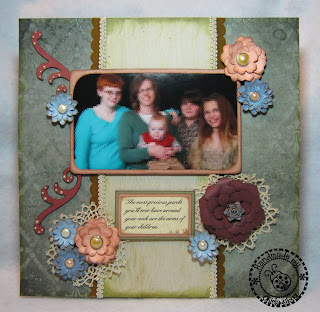 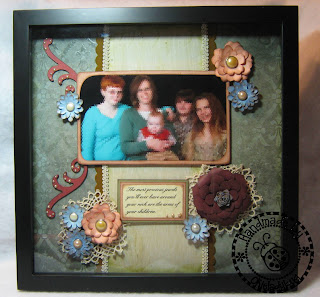 The shadow box Linda found was suppose to be for a t-shirt display box, however it worked perfectly for the layout she was wanting to do. She sent me a picture of a layout she found that she liked and thought would work with the picture. She brought the sentiment she wanted to be included.

In order to get the layout centered we measured in and then marked with a pen the 12x12 centered area and then just used the ATG gun to apply the tape and then place the layout accordingly. 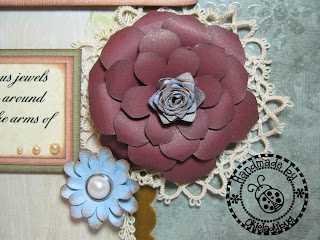 I totally cheated and used the Design Studio file I had from the MEMORIES frame that I had done for the flowers. They seemed to work well for the layout and the number of flowers worked as well. This way we didn't have to figure out sizes and such.


I did add pearl brads for the flower centers, trying to use different pearls for each flower type. 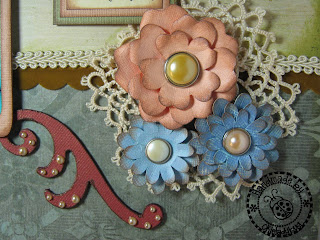 Linda thought of the idea for the pearls on the flourishes. She did help some by pushing the load and unload button on the Cricut. She also glued the cardstock to the chipboard shapes.

We had a great time working on the layout even though it seemed to take all day. That might have been because we took multiple breaks and of course we had to go to lunch and the scrapbook store! Linda was kind enough to buy my lunch, saying it was my pay and that I was earning about $2 a hour! HA HA HA
Posted by okieladybug or okie_ladybug