I saved this frame to post last because it was my favorite and I think by far the best of the frames I did. I sure didn't want to post it first and then have you guys look at the others and think "damn okie that one looks like chit compared to the first one" *okie smiles slyly at the methods to her madness*.

I actually saved this frame to use as my Dirty Santa gift. I was concerned people wouldn't care for the frames but after sending pictures to a friend who said she loved them I thought the frames would make good prizes. I made this frame last and even I was impressed with how it turned out! Of course it wasn't my talent that made the frame but the awesome elements that worked together and the benefit of using the Flower Shoppe cartridge! I spent quite a bit of time on this frame, mostly because of the cutting of flowers and assembling. 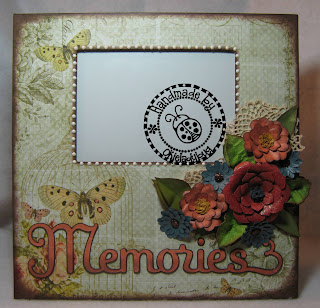 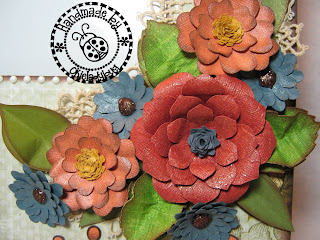 I am really enjoying making the flowers and they are a lot more simple than I thought they would be. I can't wait to do some more of these for some projects. I of course used Design Studio to layout the basic flower so I could figure out the sizes I needed. I did two different leave cuts for the frame and folded them in half before scrunching the ends toward the middle. 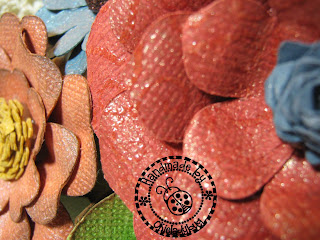 I used a background swirl stamp and did heat embossing before assembling but after adding the glimmer mist you can't really see the embossing much in the picture. It did show up a little better in person. Next time I will forgo the Glimmer Mist if I want to add heat embossing to the flowers. 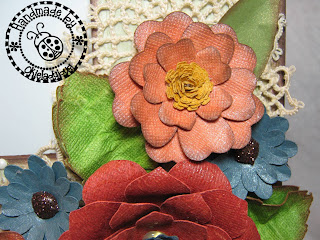 Inking the edges of the flowers seemed to give them a more realistic look and besides, ya'll know I have an inking fetish *okie is seriously thinking of seeking treatment*. You can see the brads a little better in this picture. I just used regular brads I got on clearance at the Dollar Store and put a glue dot on top and then dipped in some glitter. It's an inexpensive way to make glitter brads and you can make the color you want. 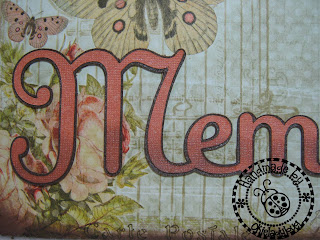 On the title I inked the lower half of memories because it just looked a bit stark at first. I like how the inking only half made it seem to blend better in with the theme and elements. I cut the title shadow out of some chipboard to help give it a little more dimension.

I think one reason I am enjoying making these frames so much is because you can add so much dimension to it without worrying about the elements getting smashed like they might if it were a scrapbook page going in a scrapbook.  One thing I have done since making the frames is invest in a fine tip glue gun. The one I had has a larger tip and was a little to difficult to work with on some of the smaller items such as the flower centers.

Like I posted last week, Consumer Crafts is having their shipping special for the rest of the month and while they are still having the special I am going to order quite a few of the 12x12 frames and probably a few of the smaller ones. I am actually thinking of making some...okay ya'll don't faint...and selling them!! *okie watches a few of her readers faint* Uh will someone grab the smelling salts?
Posted by okieladybug or okie_ladybug