WAS ANOTHER HUGE SUCCESS!

I picked up Karen and a surprise guest from the airport on Thursday. Karen flew in from Connecticut and had a connecting flight in Houston. When she arrived she got a surprise as my friend Carmen was there. Karen had no idea that Carmen was coming! It was really hard to keep it a secret but it was so worth surprising Karen. Carmen had made a video of her surprising Karen but I can't get the sound to work so I can load it to my blog *okie really thinks she needs to take some video classes or something*.

On Friday Karen, Carmen and I ran around and got some of our last minute shopping done and had lunch with Naomi, which it just happened to be Naomi's birthday so we each took her a birthday card as well. That afternoon my sister Cheryl and my friend Robyn made it in.

Back to the party stuff...each guest received a goodie bag filled with some little gifts from me. Here are some pictures. 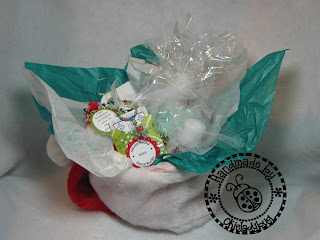 After Christmas last year I found Santa hats on clearance for 25 cents and I knew they would make good little goodie bags for my guests so I snatched up a bunch of them. To make them keep their "bowl shape" I used a safety pin to pin up the pointy end to the side of the hat. I used some paper twisted up to make the circle stay at the bottom.  I used green and white tissue paper to add a little bit of festivity and the filled with the goodies. 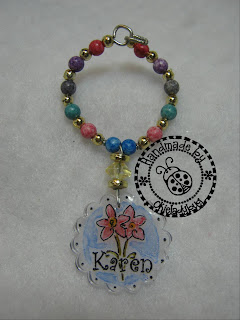 You might have already seen the wine charm that I posted yesterday, but these were put in the goodie bags, hanging from the ribbon on the Santa Bucks holders. This is a little bit better of a picture than I posted yesterday. You can see more detail of the beads and coloring on the charm. They were super simple to make and everyone loved having their own wine charm. 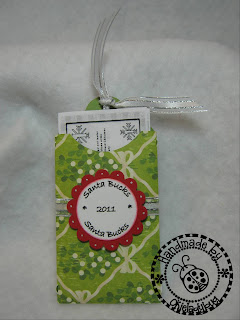 Each year my guests get Santa Bucks for the auction, this year I used Tags, Bags, Boxes and more to make the little holders for the Santa Bucks. I used my Stampin Up scallop punch to make the red circle and used Microsoft Word to print the white and then punched with a circle punch. I added some white silver adorned ribbon around the middle and then added some at the top.

They each started out with 280 Santa Bucks and were able to earn more by winning at the games they played. 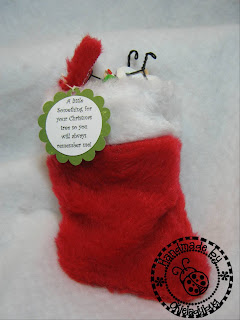 These little stockings were found last year after Christmas as well for a quarter. I put some little dress ornaments in them that I found at a bargain store here in town. I forgot to take pictures of them. Each dress was a little different and my friend Lisa wrote on the back of each one "7th Annual Girlfriend Christmas Party Dec 3, 2011". My hand writing is awful, I so appreciated Lisa taking the time to help me with them! She also helped with getting most of the stuff ready for the goodie bags.

I used the scallop punch again for the little tag on the stocking. 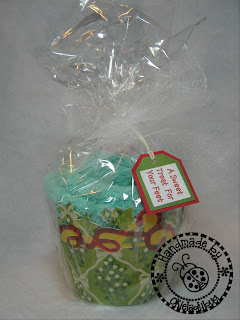 Another little goodie I put in the bags was a spa sock cupcake. I used Cupcake Wrappers to make the wrapper and chose this one because I thought it looked the most festive for Christmas.

Here is a great tutorial on how to make the Spa Sock Cupcakes.
GREENBEAN CRAFTEROLE SPA SOCK CUPCAKE

I think I cut these at 3.5 inches, how big you need to cut them depends individually on the wrapper since they seem to come out different sizes depending on the design of the wrapper.

I added a little bottle of Bath and Body Works lotion and a little squeegee in the bags as well. Everybody was thrilled with their goodie bags!


Here are some pictures of my guests looking through the goodie bags.

This is a picture of the "Cricut Crew".