Back in the Saddle - Get Well Card

When at Hobby Lobby sometime ago I found some western theme paper by Paper Studio and knew I wanted to make some cards with it but I wasn't sure what I wanted to make. I was going through my card inserts that I make when at Stamp Club and came across this sentiment so I grabbed my Old West cartridge and got to work! 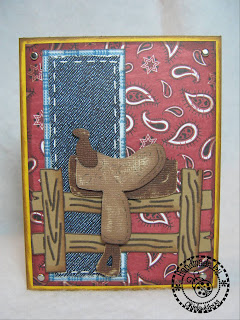 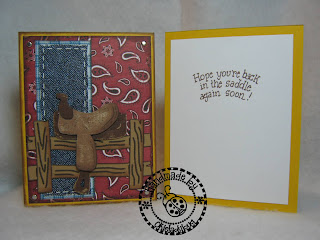 One of the great things about Stamp Club is that Carol, the lady who runs Stamp Club, brings a ton of stamps to each meeting and there are always some great sentiment stamps. A lot of the time Linda, aka LGuild, and I will take a bunch of card inserts with us and just stamp off a bunch of sentiments so we can have them for later use. I think this makes a great get well card for any cowboy or wanna be cowboy! 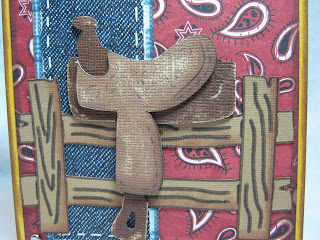 I don't like all the brown for the fence and the saddle and I think now I would have went with some greys for the fence so there could have been more contrast, but oh well...what's done is done! I did use mounting foam on the saddle for some added dimension. A little light sanding on the saddle gave it a worn look.


I used the Cricut markers on the fence and then used a Cri-Kit gel pen for the stitching on the saddle. While a lot of times I do this by hand I am trying to use the gel pens more often because it doesn't seem to take near as long and I don't get hand cramps that way!

My friend Nancy saw this card and said she was going to have to tell her boyfriend to get sick so she could give him one of these *okie cracks up laughin*. That girl is a nut!!

Email ThisBlogThis!Share to TwitterShare to FacebookShare to Pinterest
Labels: A2 Card, Get Well Card