I have been making some gift bag and matching card sets lately and thought I better get them posted before you guys think I gave up on crafting completely!

This first one is actually the one I made yesterday. 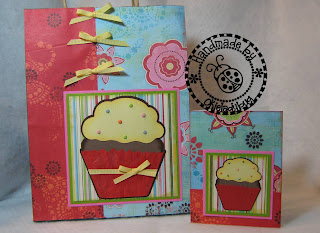 I will tell you that I am posting a picture of the cutest giftbag. I got lazy and only did tissue paper on two of the large cupcakes. I got to thinking that these will probably be thrown away and I don't want to put that much effort into trash. 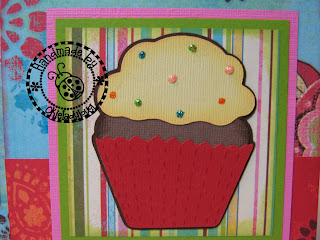 I used on the larger cupcake on the gift bag. I didn't write anything in the card thinking people might want to use it for something besides a birthday and they could write their own sentiment on the inside.

I cut the paper wrong for the card, I meant for it to run vertical instead of horizotal, like on the gift bag but once again I was on the phone and screwed up *okie thinks she really needs to stop talking on the phone and crafting because she messes up a lot of chit this way*. 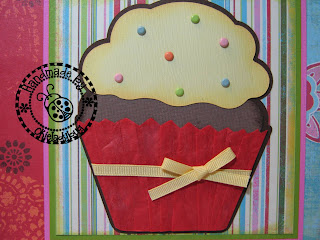 cupcake holder on the Cricut cut. I know the tissue paper does make it look so much nicer, but it was not an easy feat and I didn't want to do it on all four. Since these will be used as prizes at my Christmas party this year and most of my guests are not paper crafters they will never know that the tissue paper looks so much better.

I will be posting gift bag card sets for the next few days.
Posted by okieladybug or okie_ladybug