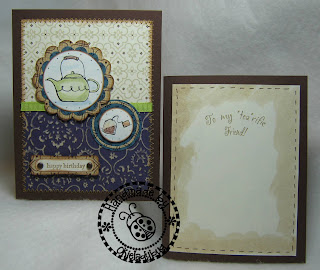 I would be getting it! I did indeed get it at the last SU party I went to but just now got time to use it *okie isn't sure where her time goes but thinks her time has a habit of running away*. There are several really cute stamps in the set but for this card I am going with the tea kettle and the tea bag. There is a sentiment stamp in the set that does say "tea"rific and that is where I got the idea for the inside sentiment.

I did have a hard time thinking of how to make a cute layout for the card and then I gave up and just used this one.

There is actually a lot of work in this card even though it may not look like it. 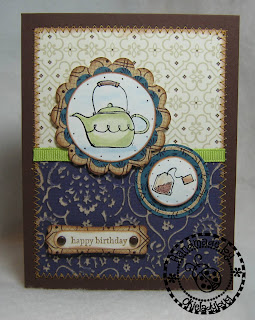 I am not even sure where to start. Okay let us start here... 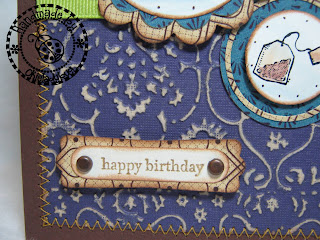 on the folder to sand. This method keeps the embossed image from getting smashed while sanding. I then used the walnut ink to go over the paper to give it an aged look. I worked quickly and soon as I had it all covered I used a paper towel to dab off the excess. I think it added a nice background and didn't look as stark as just the white core would have.

Notice the thin circle around the tea bag image. I did that by first punching with a 1.25" punch and then using a 1 3/8" punch and lining up the hole left from the 1.25" punch.

I used the Word Window punch for the happy birthday sentiment and then put it on top of some cardstock I had punched with the Modern Label punch. I added some brads for a little extra embellishment. I used mounting foam to then attach to the card.

The inside sentiment was completed using the Hallmark Studio program. 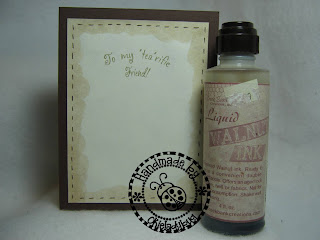 I used the walnut ink around the edges to give it a tea stain look *okie sighs and once again thinks she is such a genius*. I was on the phone with my friend Linda, aka LGuild, when I printed the inside of the card and guess what...I PRINTED IT THE WRONG WAY! So I had to print again *okie thinks there were her genius status down the drain...once again*.

I added a picture of the ink because I figured you guys would be hassling me and asking me what it was and what it looked like. So now you know...and don't be hasslin me! *okie tries to give a mean serious look but cracks up laughin instead*. I bought this bottle a few years ago and a little goes a long long way. I think it was $4.99 when I got it.

Dang that was a lot of directions or something because this post seems awful long! *okie yawns and thinks she will go to bed and is thankful for post options of being able to schedule posts*
Posted by okieladybug or okie_ladybug

Email ThisBlogThis!Share to TwitterShare to FacebookShare to Pinterest
Labels: A2 Card, Birthday, Stampin Up