Aren't done yet! LOL But I do have all the appetizer pages done and one of the main dish pages so I thought I would post them and see what you guys think. The books are only going to be 6x6 so I had limited areas to work with.

This is the Bacon Crisp 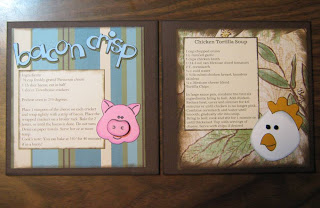 and Chicken Tortilla Soup recipe pages. I did use the Cricut Markers on some of the elements and I think I like them! Of course I inked all the edges.....it is compulsive with me now! HA HA HA

I pop dotted the pigs nose and used small brads for the chicken's eyes. 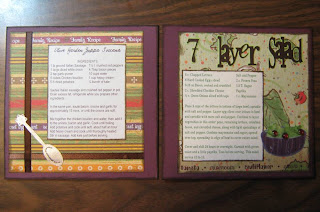 soup recipe and the 7 Layer Salad recipe. Luckily I was able to cheat on some of these since I had the recipes saved for my own use and also on the 7 layer salad I had used it for a recipe card for part of a swap I did. The lettuce is made from handmade paper and the tomatoes are Robin Nest embellies.

Here is the Steak Marinade recipe, 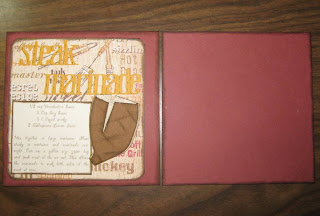 again I had used this one on a recipe card before, and the steak is from a swap I did. The blank page is where I will put Main Dish, but I don't have it done yet.


This one is the first page of the 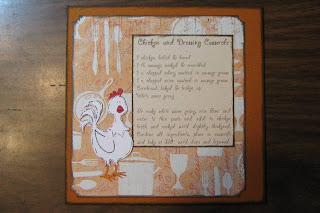 Main Dish section, it is my daughters favorite thing I make, which isn't often. Ya know you don't want to make too much of a good thing...well that is my excuse anyway! HA!

So ya'll let me know what ya'll think!