When my daughter was school she was in a ton of activities and there was about a 3 year period where we had something to do EVER NIGHT except for Sundays...oh how I looked forward to Sundays! Well in a way I did but in another way I dreaded Sundays. I spent Sunday's pre-prepping food for the next week. Since we had very little time to have dinner I would try and make things we could during the week. I would often cook up family packs of ground beef, drain the grease and then put in 1lb package freezer bags so we could have Hamburger Helper, spaghetti or some other dish that used ground beef.

My days are not quite as busy anymore and I don't have to spend my Sunday's cooking a ton of food and storing in the fridge and freezer, heck let's be honest here...I am overdoing it if I cook twice a week. Oh but back to the pre-prepping food! I went to the grocery store because ground beef was on sale and I picked up 20 pounds. I know that might seem like a lot to some folks but to me, well I am regretting not getting at least another 20 pounds! I had intentions of making homemade chili but it was late and that didn't get done. I did get 10 pounds of the ground beef made into patties, they are in the freezer right now waiting to get frozen and then I can toss them in bags and just pull out however many I need when I want to cook them. The other ground beef was broken down in a few 1lb packages and then larger packages when I get ready to make chili. 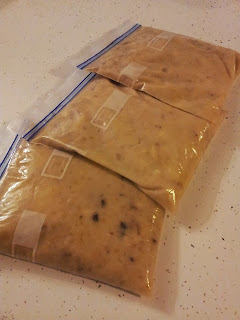 Another bargain I got at the grocery store was a big bag of over ripe bananas for 99 cents! When I was growing up my mom worked in the meat department of Humpty Dumpty and the produce manager would always ask her if she wanted to get some of the over ripe banana's, and sometimes other fruit so guess I always think about this when I see such things and remember what great food can be made. I brought the banana's home, peeled them, put them in freezer bags and mashed them up. Now each bag has enough bananas for 2 large loaves of banana nut bread when I am ready to do some baking!

I know we all tend to do what our parents did and I am quite certain my mom would be proud of me still thinking ahead and pre-prepping food! Just wonder what she would think of the 30 pounds of pork chops I broke down and vacuum sealed a few weeks ago!

So does anyone else pre-prep food?
Posted by okieladybug or okie_ladybug