Aprons anymore? I use to use one all the time but it came up missing *okie wonders how things come up missing like not only her apron but forks, towels, bowls, etc*. I found some aprons pretty cheap at my favorite bargain store, Wall's, and decided I would see if I could bling one up for myself. Oh the apron is 100% cotton and is like a canvas material, very nice! 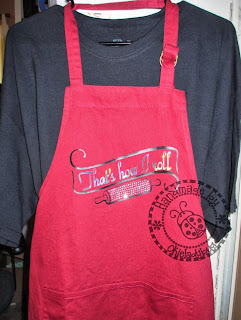 I did searches for aprons to see if  could find any good decorating ideas and I really liked the "That's how I roll" one I saw and thought I would go with that idea.

I used one of the swashes from the Samantha font and then added the saying inside of the scrollish frame. I can't remember the font I used off hand but I do know I did a shadow of it to make the letters a little thicker. I also lined up the words to the bottom of the scroll so I could get them curved a bit and then just moved all the words up toward the middle of the scroll. I got the rolling pin from a clipart image and just did an import and trace in MTC.

I had originally wanted to do the saying in white HTV but I am running extremely low on white so I went with the Spectrum Holograhic instead. 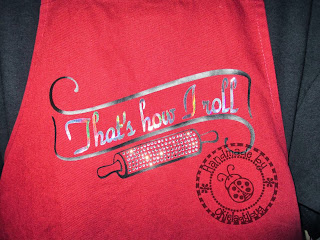 One more reason I love MTC is that it has a rhinestone feature where you can do an "outline" or a "fill shape" to make a rhinestone template. I did do a little tweaking since the fill shape would have had the rhinestones on some of the black vinyl but it was no big deal to just delete the circles I didn't need to cut.


I was really nervous about trying to do the rhinestones on the hotter temp and longer time with the htv already down so what I did was I got my transfer rhinestone sheet in place and then I used the transfer film from the black HTV to lay over the whole image. I placed the image where the rhinestones were on the edge of the heat press and most of the HTV was out of the heat press. This seemed to work pretty good.

Now I guess this will either decorate my kitchen or I will have to start doing some cooking to justify this purchase and project! *okie thinks the decorating part is likely more plausible*
Posted by okieladybug or okie_ladybug