My youngest Goddaughter, Amber, got her first "lil" for her sorority this fall and while she was a bit nervous about how well she would do I think she is doing quite a fine job. She actually didn't find out until almost the last minute *okie hates it when her kids find out things the last minute because that always means okie finds out the last few seconds* that she was going to have a "lil" and needed a few things QUICKLY. One of them was a canvas. She asked if I would help her since she had never done canvas art...little did she know I had never done canvas art either! 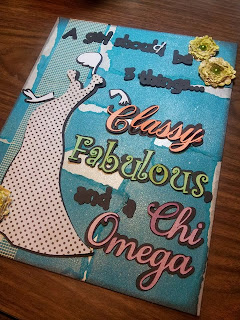 We went with the "lil"'s favorite colors for the most part. I looked around on the internet for quotes that are used with Chi-Omega and found "A girl should be 3 things...Classy, Fabulous, and a Chi-Omega". I wanted an image that showed femininity and class and found a silhouette that I thought would work for the project.

This is a picture of the work in progress, I kept trying to get an idea of placement of the elements.

I think one of the things you are suppose to do with canvas I have texture, texture, texture so I tried to think of ways to add texture. I covered the canvas with Glimmer Glaze and then added the pieces of ripped cardstock then added a spritz of Glimmer Mist to the top. On the quote I made sure the key words were done in seperate fonts and added texture with embossing, glitter and rhinestones. I also found some magic mesh that I added for more texture. I had some book flowers in my stash and decided to use some of those as well. I sprayed those with Glimmer Mist as well. 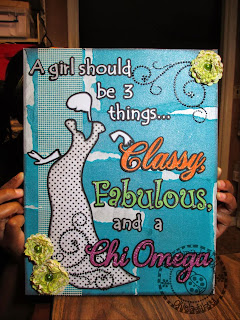 Here on the finished project you can see how I also decided to add a few flourishes of bling in the corners. I was not actually happy with the end project and thought it looked a little cheesy but my Goddaughter said she loved it. I had to laugh at her thinking this was something that was going to only take "a little time" and it actually took a few hours, and that was with her helping me glue the letters for the words.

Oh you might need to make the picture bigger to see all the elements and texture in the project.

Since making this project I have thought about doing some other canvas art but I am also thinking "I don't need to get into another media right now". But then again ya know when a bug hits me I am gonna give in!
Posted by okieladybug or okie_ladybug