After making card kits for my groups at McCalls I ended up with small pieces of scraps and I used those to make cards for my friend Carmen's daughter Dani. 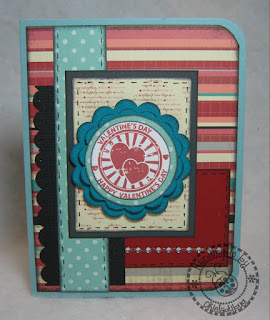 The sentiment circle was obtained from the internet and I just printed it on my computer and then used a circle punch. I used two of my Stampin Up Circle punches on the teal paper and then added mounting foam between the layers to get it to pop up off the card. 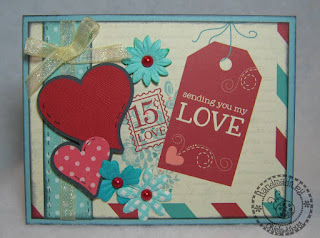 I had cut extra hearts for the kits for McCalls in case anyone messed up but luckily they didn't and that left me with extra hearts which came in handy for these "scrap" cards. The mat of the card is the back side of one of the other papers and it had that stamp and tag image printed on there. I just worked the flowers, hearts and ribbon around the images and I think it turned out pretty nice. 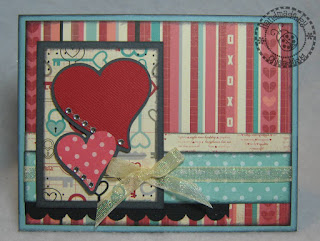 I used a left over mat and hearts from the kits and then added some of the scraps I had to make this card. I think the bling on the hearts really added to make it different than the other one I did that was somewhat similar.

Is anyone else ready to move on to some other projects besides Valentine's Day? I AM!!
Posted by okieladybug or okie_ladybug

Email ThisBlogThis!Share to TwitterShare to FacebookShare to Pinterest
Labels: A2 Card, Valentine's Day