Have been so busy with work and getting Christmas stuff done I haven't had time to get the posts done about the party. Now where were we?

Oh yes...it was time for the games!

I always start with a few worksheet games to test my guests Christmas knowledge. This year we did Christmas Movie Trivia and a Holiday Word Scramble. Some guests did excellent and some...well evidently they dont' know a thing about Christmas! HA HA HA 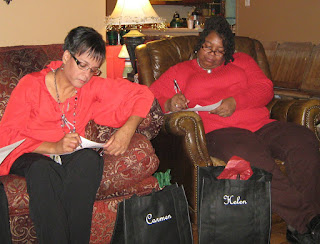 Carmen and Helen look so studious as they work on one of the games. You can also see their swag bags in this picture. I think everyone really liked the bags this year since they were personalized and they were big enough for them to put their prizes in as well. This way they didn't get them mixed up with the belongings of others and were easy to carry home. 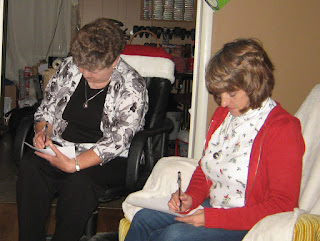 On the left is my friend Linda that I talk about all the time. Linda has been attending the parties I think for 4 years. She also gives me some great ideas for prizes and then sometimes I tell her "well you make the shit then" and we just laugh.

Kimmy is the other lady in the picture. She was new this year and I contacted her about filling in for another guest who was not able to make it due to family medical issues. Kimmy drove up all the way from Austin Texas for the party. She quite frequently said "I'll go Texas on your ass" and none of us were quite sure what that meant but it is a phrase we will never forget since we heard it all night.


After the word games we decided we better get a group photo before we have too many refreshments and forgot *okie thinks that punch was rather refreshing and knows if she had any more refreshments that night she likely would have not remembered the night*. 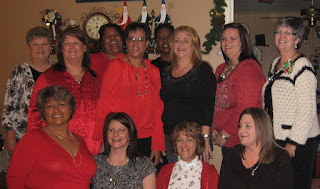 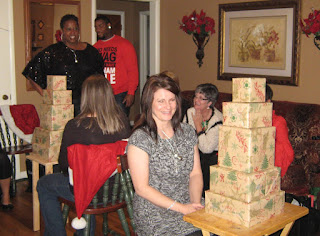 Our next game was the Gift Stacking Game. There were 3 people to a team, two sitting back to back and one standing and placing the boxes. the one that was facing the standing person described how the boxes were stacked and the person facing the other direction had to stack the boxes according to the verbal directions that were given. This team consisted of Andrea, Nancy and Wendi. 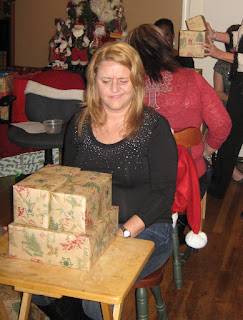 I just had to share this picture of my BFF Karen and if you are thinking she was thinking "WTF!" you are wrong..she was actually saying "WHAT THE F$UCK". Carrie was giving her directions and we were all laughing because the directions were rather vague, such as "okay now grab the square box".  I am quite sure that this team was the one that got the most laughs due to the instructions given and Karen's fabulous facial expressions throughout the whole ordeal. 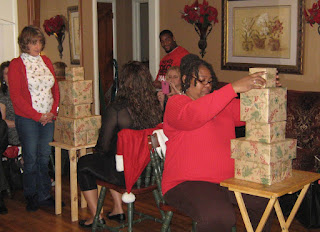 I have to brag a little bit with this team. My daughter stood in on the games since I had a guest cancel at the last minute due to some unforseen circumstances and she did a wonderful job. This team that consisted of my daughter, Helen and Kimmy. Shiane gave wonderful directions and their penalties were the lowest but their time was the highest.

After such a tedious game the guests decided they needed a refreshment break before continuing to the next....which will be tomorrow's post!
Posted by okieladybug or okie_ladybug