Saturday was the party and we were able to relax a bit and not have to rush rush rush this year. That morning and day I was doing some last minute cleaning and setting up the living room for the guests while my house guests were busting around in the kitchen getting their appetizers for the party all made. 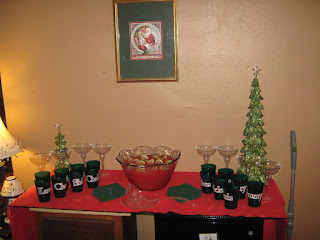 I got the punch area set up and I think I came up with a rather ingenious set up this year. I have this little fridge that was my daughters when she lived in the dorm, we refer to it as the beer fridge, and a little cabinet that were along that area in the dining room. I used a long piece of tempered glass to put across the top of them and added a tablecloth and WALAH! I had a great punch area!

I found the cups and plates at the bargain store last month and that gave me plenty of time to personalize a cup for each guest. Even though the cups were disposable I thought it was a great way for people not to get their cups mixed up. I used white and silver vinyl to do the names. 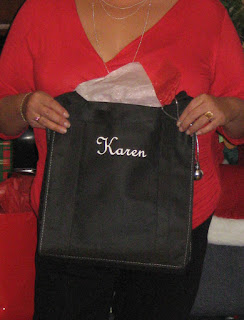 I am really big on personalize things for the party and that is one reason I am a little strict about the guest list and if people show up or not. This year for the "swag bag" I ordered some reusable shopping bags from One Bag at a Time and personalized them with iron on vinyl. I called the company when I found them on the internet to make sure they were legit and thankfully they were! Everywhere else I looked wanted me to order like at least 100 bags, I only needed 12. I actually ordered 13 and it's a good thing I did since I didn't think about my iron needing to be on a lower setting for these bags...the first bag got beyond scorched! Everyone loved their personalized bag! Each bag contained a personalized ornament, a small bottle of Bath and Body Works lotion, a personalized pen and their Santa bucks. They were great for the guests to keep their prizes together and to carry home. 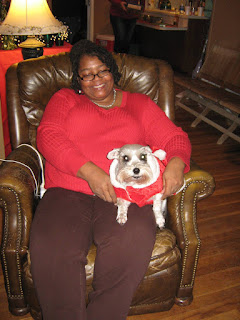 Helen claimed her chair, I would like to say early on in the party but it was actually as soon as she walked through my front door I do believe! What she didn't realize is that the chair is Lucy's recliner and who ever sits there must share the chair with Lucy. I don't think Helen minded too much though.

Lucy gets so spoiled when I have guests in for the party and she ends up driving me NUTS wanting me to pet her all the time for about a week or two after the party. I think I am going to have set some strict rules about petting time in the future so I don't have to go through this with Lucy every year! 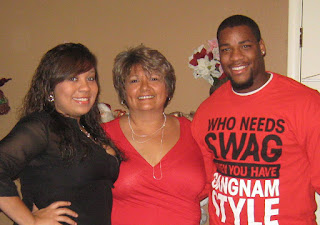 Someone snapped a picture of me and the kids before the party got started. This is actually the first picture we have of all 3 of us, at least I think it is. Shiane and Chuck were a great help during the party. I did have one guest who had to cancel at the last minute due to unforeseen circumstances and Shiane had to take her spot in the games. Chuck was busy with refreshing everyone's drinks and did the judging in some of the games and was also a time keeper on the games, those pictures will come later! 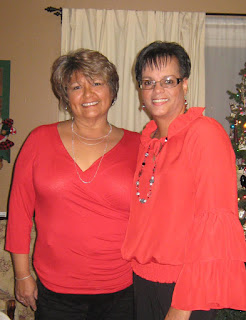 Another traditional picture is of me and Carmen. We make sure we get one every year. I think this year's picture might be my favorite. We look like some hot sexy mama's in our red blouses and sparkling jewelry!

All the guests had arrived by 7pm, even though the party was set to start at 6pm. Wendi was running late because she was in Tulsa during the day at the Nutcracker Ballet, which she was not happy about having to go. She texted several times to let me know she was on the way. I think she was scared if she didn't she might be marked off the list. However, she not need to fear that. Wendi and I have become great friends since we met a few years ago when she bought my first Expressions from me. Some of you might remember the name as she was the one that went on the Cricut Cruise with Karen and I.

Okay sorry this post is so short but I am running short on time and must get some other things done. The next posts will be showing the games we played and a few stories to go along with those!!!
Posted by okieladybug or okie_ladybug