Great End To The Season!

I know I told ya'll about my love of football yesterday but let me tell ya I don't think I have ever loved watching a game as much as yesterday!

I did so much yelling during that second half that I have come down with a case of laryngitis. The kids have been laughing at me all day and while Shiane is being nice and telling Chuck to stop talking to me so my voice will heal, Chuck is saying "no let's keep her talking so she won't be able to talk at all". I contacted my boss and asked if she thought I should work tomorrow and make my clients suffer through trying to figure out what I am saying or just take the day off. She told me to make them suffer and then put LOL, and said I might want to take the day off. So I guess the day off I shall have to take.

The first half left me thinking "okay I might as well go home" since the score was 17-0 and not in our favor. That sure changed after half time the boys came out and our defense went to work! Not sure what all the coaches said to them *okie wonders if it is some kinda football player/coach cult ritual not to talk about such things to others* but it did wonders!

In the second half the defense only allowed the other team 14 rushing yards! GO TIGERS! One of the defensive players on our team recovered a fumble and went for a 50 yard touch down. That was kinda the icing on the cake for him since it was his last game due to being a senior, but likely not his last game of football since some scouts are checking him out. It also got the team and the crowd pumped and the whole atmosphere changed after that crucial play that put us ahead. 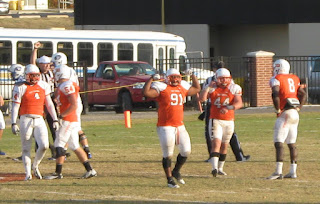 Chuck played the best I have seen him play this year and I got a snapshot of him getting the crowd pumped up after he made an awesome tackle. And yet again, I remember why I scrapbook! Even though Chuck is not my son by birth I swear I don't think I could be more proud than if he were. I could tell Shiane was a bit proud as she turned and told some women behind us "Yep, that's my boyfriend!". 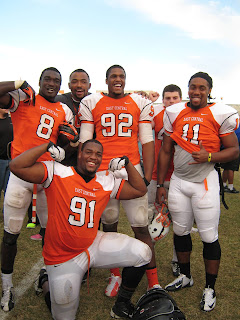 I took a ton of pictures but this is one of my favorites of Chuck and a few of his teammates. This was after the game and everyone was in a good mood and there were more camera's out than at the Academy Awards! Okay maybe not but I liked the sound of that to emphasize the atmosphere. 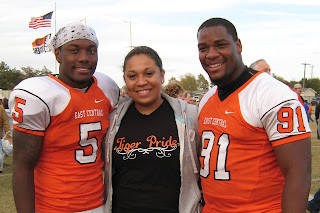 Shiane had been wanting to get a picture with her cousin Qumain after a game but we always seemed to miss him. We knew this was going to be the last chance until next season so we made sure we found him this time. Shiane and Qumain are only a few months apart and have been in school together since headstart.

I have been buying different papers to scrap football pictures for probably about 6 months and now it's time to start sorting through and getting some layouts designed for Chuck's football scrapbook! If he gets too bored during the off season I might even get him to take up the hobby! HA HA HA
Posted by okieladybug or okie_ladybug