During some of our craziness Carmen made the suggestion we drive to Louisiana and go to a casino. We all laughed about it but then somehow it became serious business. Laurie had went to get her friend Michelle who was getting off work at CKC and mentioned it to her. Michelle said she wanted fried clams, crab legs or something and was up for the trip. So yes, we drove 3 hours to the Isle of Capri in Lake Charles Louisiana!!

Now let me warn you guys, if you are ever kidnapped by a bunch of crazy scrappers make sure you have friends you can call and let them know your whereabouts in case you do not make it back safely *okie is so glad her new phone has the little GPS find me feature*. Oh also another thing....you might want to invest in some Depends!!

Laurie kept talking in her Poncho voice and we were all dying laughing. Now let me tell ya about Poncho *okie hopes everyone remembers her bringing up Poncho in yesterday's post*...Poncho evidently is a very dear family friend and hand of Laurie's family and has been with the family back from Laurie's grandfather. Poncho as you might have guessed is Mexican and Laurie says he doesn't understand English that well. But then again I think I remember Laurie mentioning she believes he understands better than he lets on. Well it seems if Laurie talks with an accent Poncho will understand what she is saying better so all the way to Louisiana and most of the way back Laurie was in Poncho mode. Carmen kept calling her Pedro *okie shakes head and really worries about Carmen sometimes*.

I think we figured out where every McDonalds was on the road in between Houston and Lake Charles because we had to stop and each one and use the bathroom because we were laughing so hard and so much *okie is really surprised no one peed themselves the whole trip*. I had sent out an SOS on Facebook that I had been kidnapped to see if anyone would come save me. Lori even posted on her page they kidnapped me and was open to ransom for my safe return. Sadly, no one offered anything...*okie is beginning to see she really just doesn't know who her friends are after all*. At least Kristy M., who is also from Houston, did post back to Lori and say "I was thinkin' but I'm not parting with any of my Cricut stuff, besides, you have everything I have anyway :)". Not sure that is much of a consolation though! 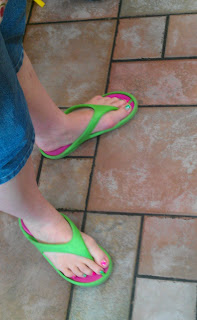 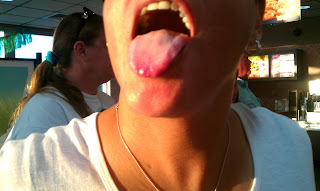 I did finally manage to snap a picture of Lori and Laurie without interference. 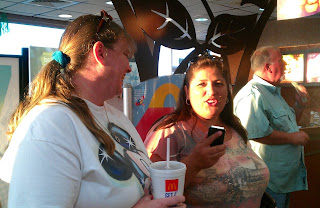 Now you see the older gentleman in the background? Well before we left out of there he was looking at us, shaking his head and laughing. I believe we decided that he either figured we were all completely nuts or he was glad someone kidnapped me! Of course they are saying they kidnapped me all loud and chit right there in McDonalds. I think Laurie was beginning to wonder if the man was going to call the authorities on them. We were close to the state line by this time so it would now be a case for the feds.

Our final bathroom stop was at a rest stop and by this time I think Michelle was irritated with the rest of us. She wasn't laughing like the other ladies and I were so she didn't need to go to the bathroom like we did. We left her in the vehicle to guard it while we took our final bathroom break.

We finally made it to the Isle of Capri in Lake Charles around 10pm. Michelle, Lori and Laurie went to see if they could find seafood, which they did not get because the buffet was like $26 a person. Carmen and I head toward the slots. It was hot as heck down in the area Carmen and I were in so I went upstairs to watch for the other gals. There wasn't good phone service but luckily were able to meet back up. Laurie sat at a machine I just got off of and won like $35! I tried telling her 20 of that was mine but she didn't listen. We got lost in the casino a few times but then found our way back to where we had came in. Laurie, Lori and Michelle left Carmen and I at the casino while they went to find something to eat. I ended up leaving with $140 more than I went in with so that was pretty good.

The trip home was much more quiet than the trip there. Everyone was exhausted! Michelle told Lori she should feel honored because Michelle let Lori ride up front with Laurie. Michelle evidently got sick from what they ate at The Wafflehouse and was in the back with me *okie is so glad Michelle didn't puke because okie would have puked right back on her*. Carmen was in the very back. Lori and I tried to keep talking so we could keep Laurie awake while she was driving. We stopped for gas at one place and I wanted to pick up some cowboys but the gals wouldn't let me *okie smiles remembering how nice those wranglers were fittin one cowboy*.

We finally made it home around 5am I think. Laurie had made arrangements for a late check out so she and Michelle could get some sleep before heading back to the Austin area. Lori was only going to be able to get a few hours sleep because she had a meeting the next day. Carmen of course had to tend to her family's needs so I guess I was the only lucky one about being able to sleep!
Posted by okieladybug or okie_ladybug