I wasn't sure what to expect from CKC. I know my friend Linda, aka LGuild, went to the one in Tulsa and she said that GASC in Arlington was way better than the CKC she went to and guess what....GASC was a lot better than CKC in my opinion too.

However, the company was FAN TAS TICK!! Carmen, Laurie and I took the Oh So Beautiful class sponsored by Clear Scraps *okie thinks she will wait for another post to post about that*. We actually talked Laurie into going to the class, well maybe not so much talked her into it as we went and paid for her to go so she didn't have a choice *okie and Carmen are not a force to be reckoned with when they set their minds to something*. After that we met up with Lori and chatted for a bit before they had to go to class. At that time Carmen and I went shopping. I tell ya the shopping at GASC is SSOO MUUCCHH BEEETTTERRR! *okie hopes she emphasized that enough* But even then Carmen and I was able to pick up a few bargains. 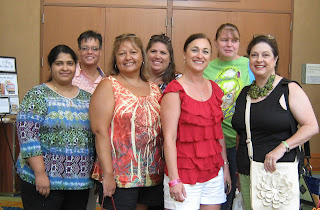 After shopping we waited for Laurie and Lori to get done with their class and we had decided earlier to go to Olive Garden to eat lunch. Our friends Pam of The BugBytes and Karen joined us. We were able to snap a few pictures of us together, even though people were complaining about not being able to walk through. I thought it was very rude of them, I mean after all THEY ARE SCRAPBOOKERS AND SHOULD APPRECIATE THE MOMENT!! *okie gives a huge eye roll*

Here are some pictures of the things I got at CKC. 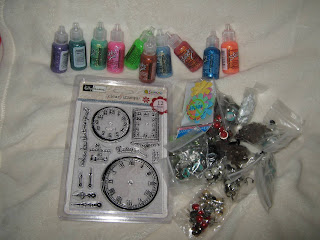 I got almost every new color of the 9 available of the Stickles. My friend Carmen did as well but when we got home she found out she had them already! *okie thinks scrappers need a pocket inventory of supplies they have so they can avoid getting duplicates*. But they will be put to good use by someone. We are sending them out to a dear friend of mine from Ohio. I found the clock stamps for like $2 or $3 and couldn't resist them. I even got a set for my friend Linda, aka LGuild. I was excited to see Eyelet Outlet there since I needed to restock my pearl brads. I love using those for flower centers. They were having a door prize giveaway and I was filling out the little card and had written my name and was writing my email address when the cashier saw it and said "HEY! I GO TO YOUR BLOG!". I started laughing and told her "well thank you!" 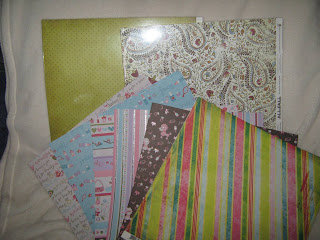 I didn't buy too much paper, this is it! I couldn't pass up the package of polka dot and paisley paper. Carmen and I are going to split those. The other paper is Fancy Pants, the stripes in the front, and Imaginesce Posh collection, or at least part of it. I think the Posh will make some nice layouts and some great cards *okie thinks of Rock Princess with the Posh*.

There was a lot more paper that was 6/$1 but I restrained from going crazy *okie thinks she needs to give herself a gold star for that one*. 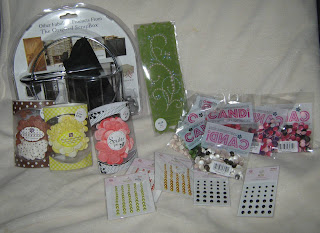 I finally broke down and got me one of those handy dandy scrappers drink holders! I have been wanting one for a few years and never ordered one. I couldn't resist the good sale on the little Prima Sprites *okie wonders about folks who say they have too many flowers since okie doesn't thinks that is pure utter nonsense*.

We were suppose to meet up with some other ladies but I think class schedules got in the way a bit. Lori and Laurie had promised me Olive Garden and by golly I wanted them to keep their promise! So off to Olive Garden we headed! Karen and Pam joined us there as well. I think the waiter got tired of us since he sent someone over and she said "I will be taking over so let me know if there is anything you need". Maybe it was because we laughed so much, or kept asking for more to drink *okie wonders if she should say it was non alcohol but then decides she will just let people think what they want*, or if we were at the table for over 2 hours, anyway he just couldn't handle it I guess!

Carmen and I headed back home after that and just kinda hung out and visited. We knew we had activities the next day with the girls, but we had no idea of what kind of adventure it would become!!

TO BE CONTINUED.....*okie thinks the next day might have to be a two part story*
Posted by okieladybug or okie_ladybug