I arrived in Houston safe and sound on Thursday. Yeah yeah yeah I know I am a little behind but in the posts over the next few days you will see why!! *okie doesn't think she has ever on the run so much in her life, and definitely never on the run with the likes of the wild and crazy women she has been around*.

Thursday when I got here Carmen and I met up with Lori, Laurie and Laurie's friend Michelle for a little shopping at Sam Moon. I didn't get anything that day but will be going back to pick up a purse for my daughter and hopefully find a matching wallet. After we finished shopping we went to dinner at the Cheesecake Factory. Lori was nice enough to make a reservation for us. I gotta tell ya folks, you can talk to people on the messageboard and on Facebook but you never know how insanely funny folks are until you meet them in person!

The sad thing is that I didn't even get pictures of people...all I got was pictures of food! *okie thinks to herself...WTH okie! What kinda scrapper are you?* I guess there will just be a lot of journaling and maybe some printed pictures of avatars from Facebook on that layout! 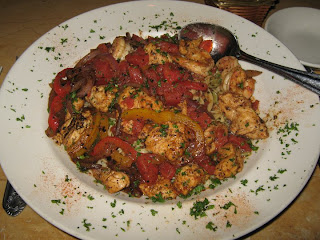 This was the dish I had. I can't even remember the name but it was some kinda shrimp, chicken pasta dish and it was great!! I was only to eat only about half because there was so much.

Carmen and I had ordered a appetizer as well of Calamari, and it was delish as well!

I have to share a funny story with you and Carmen is gonna kill me when she reads this...We were sitting in the booth and Laurie is reaching over behind her and I look at her and she says "I am playing with my butt". Carmen who is on the other side of me doesn't hear Lori and right after Lori says that Carmen says "Well how is it?" Lori, Laurie, Michelle and I crack up laughing and Carmen is looking at us like we are idiots. Carmen was actually asking how my food was but since it came right after Lori's comment it sounded like she was asking Lori how her butt was!! *okie cracks up laughing just remembering this*.


Of course we had to order dessert! Lori had ordered the De Lucci Deluxe cheesecake 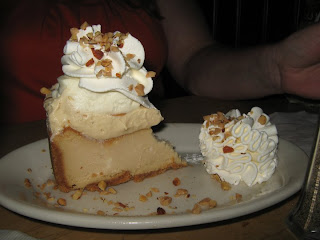 *okie so knows that is not the right name but is way to lazy to go look it up and get it right* and I had ordered the Kaluha Coffee Cocoa Mocha or some sort of thing. The waiter mixed them up and I ended up with Lori's and said "this doesn't taste much like Kaluha!". So at least I did get to try Lori's cheesecake. Come to think of it I don't think the others offered me to try theirs! *okie is now wondering why they were so rude!*. 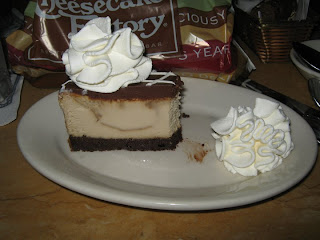 My cheesecake was delicious! I didn't finish it either though. Man they sure give you a lot of food at Cheesecake Factory! No one asked for a bite of mine, and if they had I would have given them a bite, a very small small bite.

After we got through eating we headed over to the hotel where CKC was being held to see if we could register but there was no one around. Laurie tells us the next day they found someone and was able to register. I think they cheated!! Carmen and I headed back to her place to try and get some sleep before our 8:30 class at CKC the next day....

TO BE CONTINUED.....
Posted by okieladybug or okie_ladybug