This is the same image that was used on Monday's post but just looks a little differently since the butterfly was added and the corner flowers were omitted. 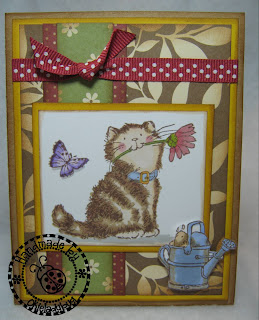 I didn't mention in the this weeks posts, but I have in previous posts, that I use the Memento Inks with the ProMarkers. I did try Stazon *okie suddenly gets the urge to grab her Stazon ink pad and give it a little sniff* but it smeared when I was coloring. Enfys of GOING BUGGY suggested the Memento Ink to me and I haven't had any problems with it.


Of course the cat was done using the same method as mentioned on Monday, 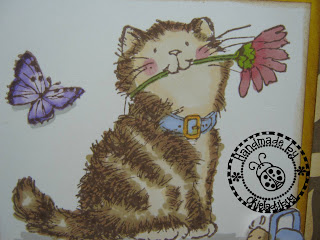 along with the same colors. I think I forgot to add that I did use Cool Grey 2 for the shadow under the cat images. The flower was done in the same pinks as the other cards as well, and the butterfly too.

For the collar I used gold on the buckle and the cornflower and pearl blue for the collar part. The buckle didn't allow for, or need shading. On the blue part I just used the darker blue on the edges and then filled in with the lighter blue. Sometimes it is harder to do shading in small areas.


The mouse was done using vanilla and I believe caramel. I did the watering 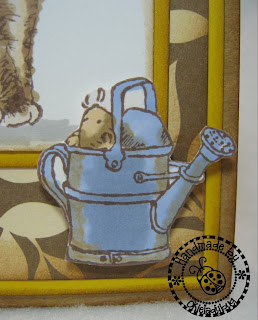 can with some cinnamon in the brown shaded areas and then used on the collar.

I cut the watering can out after I got it colored and then pop dotted it in the corner. I hate mice but I have to admit this little sucker looks cut peeking out at the cat. Although I am wondering why the cat isn't trying to eat the mouse. I know my cats sure would have been on his azz! *okie smiles a little as she remembers her beloved boys Simon and Sebastian*.