Getting ready for the Christmas party.....invitations

This year will be my 4th Annual Girlfriend Christmas Party. I didn't really start this as a tradition but it is quickly becoming one. I actually just decided to have a Christmas Party one year to help kick off the Christmas Season and it has just gone from there. Everyone brings a gift for Dirty Santa and an appetizer. I have games for the guests to play and prizes they can win. Well not really win prizes, they actually get Santa Bucks and then I have an auction at the end of the games. The twist is the prizes are all wrapped so they have no idea what they are bidding on! HA HA HA *okie can be so cruel*

Since my party is traditionally held the first Saturday in December I need to get the inviations done. I have always handmade my invitations but this year is special since it was my girlfriends that pitched in last Christmas to get me the cricut! I have the invitations designed, I have them cut and I even have part of the stuff shaded. I just don't have them all put together. STORY OF MY LIFE! *okie scrunches up her face and blows a raspberry*

The over all card size is 3.5x5 inches, more small inviation size than the traditional A2 I usually make. I was able to cut 3 card bases from 1 sheet of 12x12 cardstock. I used a Bella Stamp for the image, however 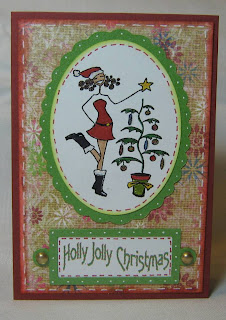 I don't know the name of the stamp. I stamped the image on Georgia Pacific cardstock and then used a fiskars oval template I had to cut it. I colored the image with Stampin Up markers from the earth elements set. The mat cardstock is Fancy Pants, the name is Flurry and is from the Holly Jolly collection.

The doodling is done with a white gel pen and then on the oval I used a SU marker *sidenote: if you haven't tried the Stampin Up markers might I suggest you DO NOT try them, cuz if ya do.....WILL WILL SOOOO WANT THEM ALL!! okie will eventually have them all!*

The lime green color is Mica cardstock. OMG HAVE YOU TRIED IT?? IT IS SO PRETTY!! The cricut cuts it quite nicely, you just have to have max pressure and blade depth. Oh I used Alphalicious for the oval, of course I had to squish it so it would fit the oval I had my image on. The book plate with the Holly Jolly Christmas is from Fabulous Finds. The words Holly Jolly Christmas is computer generated with Microsoft Word and using the text art feature, the font is fletch. Oh did ya notice the little gold brads? Well they aren't brads.....HA HA HA I TRICKED YOU! *okie thinks she might have over medicated herself this evening* Oh well yes, back to the brads that aren't brads.....they are the Robin's Nest embellies, quite nice aren't they!!
Posted by okieladybug or okie_ladybug