Well I was able to get all my orders that were paid up shipped out this week. I do have 2 orders to invoice today and a few that are suppose to be coming in the mail. Thank you to all that have ordered the decals. I was concerned about not getting enough to pay for the vinyl. But you guys helped me surpass that and I was also able to get shelving for my craft room! THANK YOU SO MUCH CRICUT LOVERS!!!

Softbrn decided to have coffee yesterday and organize her scrap space and asked who wanted to join. I DID NOT want to join in on this but did and once I got in the middle of it I couldn't quit and had to get some shelving, so off to Home Depot I went! 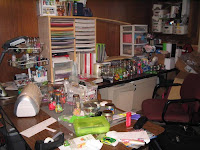 of reorganizing. Have you ever seen such a mess in your life? I kept trying to figure out how to put things back but nothing would go like I wanted it. I had dumped all my flowers and organized them by colors and put them in my Starbucks Frap bottles. I had my skittles in them but wanted the flowers in them instead. That is what caused the most problem. Because then I didn't know where to put my skittles!! AACCKK!! At this point right here I was about ready to just rack everything in a trashcan!! LOL

So after getting some shelving at Home Depot I was able to get things a little more organized!! 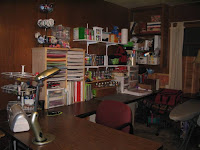 Yeah I know I still need to do some serious organization but at least I can see where everything is now!! WOW I HAVE WORK SPACE AGAIN!! The lamp on the table is one that Robynstamps suggested.....AND IT IS GREAT! It can be found at Wal-Mart for $22.97! Softbrn has one also and she says she likes it better than her OTT-lite!! Oh yes the lamp is called a Sunlight Lamp, made by Lights of America I believe. It comes in a box that is kinda maroon in color, and I found it on the bottom shelf.....just a little info if you want to go look for one.

Here is a close up picture of my paper shelf. I 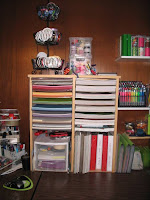 really need to get some more paper storage though, I am running out of room!! I have all my ribbon on top of my paper shelf right now. I am going to pick up a few more of the cd crates for my ribbon in the 3 tier basket. I like the crates because they can stack and you can pull the ends out of the little holes. I have stamps in the binders and want to get matching binders eventually, and also bigger ones as the 1 inch doesn't hold much! UGH!

Here is a close up of the shelves. I debated quite awhile on the shelf 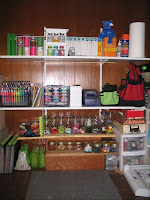 size. I did end up gonig with then 9.5 inches I think it was. These are like 45 inches long I believe. I like this system because I can always adjust the shelves later if I need to without actually having to redo the whole shelves. Oh check out the cute bear sitting on the top shelf!! A MB member sent that to me! It says "I love Yokohoma" HOW CUTE IS THAT!?! He is my scrappin buddy and doesn't get hair everywhere or knock things off the table like Simon the scrap cat! I do still have enough room to move the top shelf down and add a shelf at the very top, which I might do and put my Cricut cartridges up there. I don't keep my carts in the box since I keep them in my spinner next to the Cricut. I still love that method!

bottles. The small mason jars were candles. I bought them for like 40 cents each I believe it was and then just took the wax out and washed the jar. I need to get 4 more so I can have an even number. I like things to be equal LOL. If you look to the bottom left of the picture you can see 2 pencil boxes I picked up at Walgreens for 50 cents a piece when they were on sale. Wish now I would have picked up a few more. They are great for putting cuts in while your in a middle of a project and don't want to leave them laying out. I have my Cuttlebug folders stored in one. In the other I have my cuts for the cricut head decals.
Posted by okieladybug or okie_ladybug