I really like square cards. I don't know why. Maybe because they are different. Well with only having the baby bug my abilities *maybe sizes rather than abilities* are limited. But I was determined today to make a square card with an envie!! So after some calculating, and recalculating I was finally able to come up with one!!

I do have a file for the PLAIN 4.25 SQUARE CARD. It is with George. This one is the basic card cut. Nothing special really, but at least I have a file for one now!! It does have score lines on it. I don't have a Scor-Pal or Ultimate Crafter's Companion yet so I need score lines *okie will be getting one of these one of these days*. I am really leaning toward the Ultimate Crafter's Companion as it has the same base as the Score-Pal but also includes the envelope maker!! I saw the Ultimate Crafter's Companion on HSN and I thought "WOW! I NEED ONE OF THOSE". Evidently I said it out loud because I was at my neighbors house watching it with her and she said "and just why do you need that?" *BIG SIGH* Those who don't paper craft just don't understand do they??

I also have a WINDOW 4.25 SQUARE CARD. This one is also with George. This is nice to have that way you can pop in what ever you desire in the window. Just remember to burp the image so it will cut right!! The inside of the window measures approximately 3 inches. So quite a bit of room to put an image or wording in, if ya don't try to write a novel anyway.

I did get some cards made with the window card. 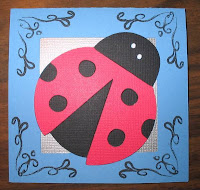 This one is the SQUARE WINDOW LADYBUG CARD. Of course my first one will be a ladybug! HA HA HA I used George and Doodlecharms on this one.The swirls are done with some Studio G stamps. There is room if you want to add sentiments also. I have quite a bit of this blue paper and that is the main reason I used it. The paper behind the ladybug is some silver metallic I have from a mat stack. This particular card will be going to a MB member's daughter who loves ladybugs also *okie likes this kid and has never met her, the child obviously has wonderful taste!*.

I was able to make a 4.25 SQUARE ENVELOPE that the card fits in just perfectly!!

I only took a picture of the back of the envie so you could see how it folds nicely. Click the picture if you would like to see it bigger. There is even a little room in case you have more embellishment on the card than I have. Okay guys I have to say I was quite proud of myself on this one! I was on the phone with my friend Softbrn when I cut the envie. I told her "I sure hope this works!". Well it did! WOOHOO There are no score lines on the envie but I think you can probably tell where to score it. Here is a picture of the card next to the envie. I used my ATG gun to tape the envie together. For the flap I just used some re-positionable adhesive.

Anyway hope you guys can use this one! I think I will be using this one quite a bit!!
Posted by okieladybug or okie_ladybug