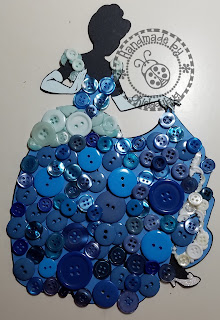 Now remember how I said I was worried I was going to run out of yellow button's because of doing Belle and then Snow White's skirt? Well guess what color I ran out of...yep blue! I had a lot of the darker blue and teal blue but the color blue for the dress I just didn't have enough of and Carmen sent me her stash of blue buttons so I could finish out the dress. As you can see in the picture some of these buttons were just too dark to use.

Cinderella's slip was the most difficult to do because it was so thin in spots. I was able to find enough of the lighter color blue to do her straps and hip area of her dress. I wasn't quite sure how to do the shoe because I knew it didn't need to be buttons and how in the heck do you make a "glass" slipper out of paper? Well my solution was to add Stardust Stickles on the shoe to make it sparkle. You might have to click on the picture and make it bigger in order to tell that the shoe does sparkle. 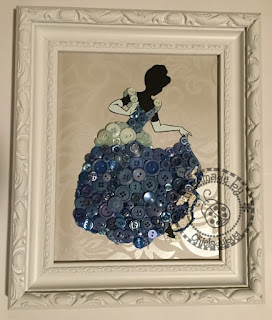 The picture of Cinderella in the frame is the more accurate color of Cinderella's dress and there is no way I could have pulled it off without using Carmen's buttons as well because I didn't have enough of the right color.

Oh I guess I should tell you that the silhouettes were obviously cut out of black cardstock and I did cut all the clothing pieces in their accurate color or as accurate as I could get because I didn't want to leave it just black in case there were small areas where a button didn't fit or it wasn't covered and black wouldn't be shining through and it also helped tremendously as a guide for placing the buttons.

You might be wondering what I used to attach the buttons. I wanted to make sure they were going to stay down and even though they finished projects won't be handled I did want to make sure none of the buttons would come lose and mess up the project so I opted to use the SOBO glue that I have talked about before. As far as I know not one button came of in the shipping process. I'm tellin ya, this glue is like magic for keeping stuff together!

Carmen and Lori met for lunch a day or two after Lori's birthday and Carmen sent me a video of Lori opening the button princesses and I was so happy to see a big cheesy grin on Lori's face as she pulled each one out and looked at it!
Posted by okieladybug or okie_ladybug