The Red Box I Found

I'm not sure I really found the box as much as it found me. 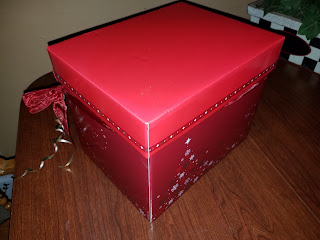 I got home from work yesterday and there was this red box sitting amongst my daisy plants in my flower bed. I looked for a note on my door or on the box and there was not a note anywhere to be found. With some trepidation I picked up the box and carried it in the house with the contents rattling slightly and carefully sat it on the dining room table. I let it sit there for probably close to an hour before I even opened it. I figured if I moved it around that much and if it was going to blow up then it would have within that amount of time. I wondered if someone was trying to cause me harm why would they put something in such a pretty box. 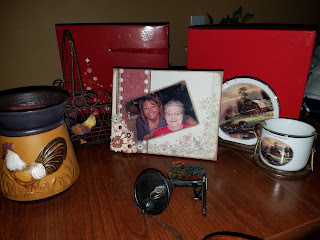 When I first opened the box and saw some items with roosters the first thought that came to my mind was that my Aunt Betty had found things at Goodwill and got them for me but then I saw a picture frame and once I tilted the box a bit I instantly recognized the frame as it was one I had decorated for Naomi probably back in 2011 after she moved into the assisted living center. I had someone take a picture of she and I at her Christmas party and when I showed her the picture she said she needed it framed so of course I went into my stash of picture frames ad decorated one up to match her room.

I knew the box had to have come from her sister Janice. Janice had asked me not long after Naomi passed away if I would like to have the picture and I told her I would and that was the last I heard about it and actually had forgotten about it until I pulled it out of the box. Now why Janice decided to give me the other items I have no idea unless she has seen my posts on Facebook about me having roosters in my kitchen. Naomi loved roosters and I have wondered why all the sudden I wanted some rooster decor in my kitchen but maybe, just maybe, it was my subconscious or my angel Naomi that lead me in that direction.

I have already placed the wax burner, basket and plate and cup in my kitchen. The picture is in the living room on a shelf. The cast iron bell is sitting on the cabinet right now until I can figure out exactly where I think it would look best.

I went on Facebook because I was going to message Janice and tell her thank you and I had a message from her saying she had left me a box in my flower bed and said "use whatever you can and do whatever you want with the rest. She LOVED you dearly!! And, I appreciate all you did for her!!!".

Now I have a little piece of Naomi that I can look at every day and think of the special bond we shared.